Uncut version of ‘Inside Men’ opens in No. 2 spot

Uncut version of ‘Inside Men’ opens in No. 2 spot 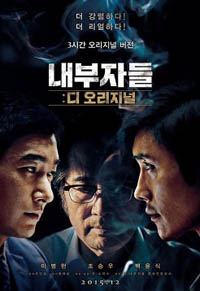 In the first weekend of January, which included the New Year holiday, “Inside Men: The Original,” the uncut version of Woo Min-ho’s political thriller “Inside Men,” got off to a good start in second place with 671,309 tickets sold. [SHOWBOX]

“Inside Men: The Original,” the uncut version of Woo Min-ho’s hit political thriller, started off strong in second place during the first weekend of January, which included the New Year holiday.

The director’s cut, which is 50 minutes longer than the original release, opened on the last day of December with 671,309 ticket admissions, bringing in 5.7 billion won ($4.8 million).

Lee Seok-hoon’s adventure drama “The Himalayas” remained at the top for the third consecutive week, pulling its three-week total to 6.4 million tickets sold, which roughly translates to 49.5 billion won.

Meanwhile, “Star Wars: The Force Awakens” dropped down to fourth place, adding 381,298 ticket admissions to bring its three-week total to a little more than 3 million. So far, the seventh installment in the legendary space saga directed by J.J. Abrams has made 27.1 billion won in Korean theaters.

2. Inside Men: The Original