It is time to prepare for peace and unification

It is time to prepare for peace and unification 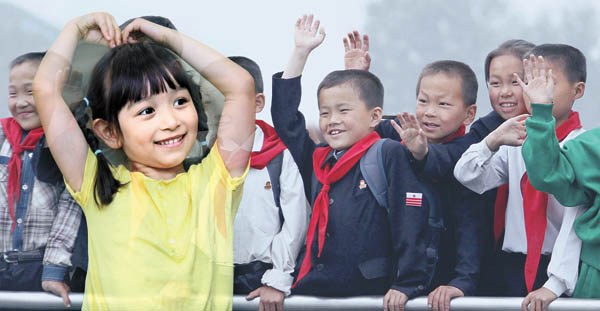 Kim Se-sil, 7, asks, “Does Santa Claus visit North Korea on Christmas?” “Do we have to elect a new king once the South and North reunite?” This composite photo shows her desire to meet and play with North Korean friends in Pyongyang. [GONG JEONG-SIK]

Opportunity comes as the political situation fluctuates. From the South China Sea to the Korean Peninsula, East Asia is in turmoil as the United States and Japan clash with China in creating a new political order.

This power structure is only expected to become more complicated as Russia sets its sights on the Pacific. It seems there is no better time for Korea to prepare for peace and unification on the Korean Peninsula with the support of the world’s four major powers.

However, let’s ask ourselves, “Are we ready to take advantage of this opportunity?”

Our diplomacy has yet to foster an environment in which the United States, China, Japan and Russia can support peace and unification without interests colliding.

One lesson we have to learn from German unification is that West Germany first secured support from neighboring countries, including the United States and the Soviet Union, and then it negotiated with the East.

During the unification process, Helmut Josef Michael Kohl, who served as chancellor of a reunified Germany, reiterated the necessity that European unity and the unification of Germany be carried out at the same time.

Political indifference makes the situation even more desperate. There is not a single lawmaker sincerely considering peace and unification with North Korea from the opposition party, much less a plan that can succeed the engagement policy on North Korea developed by former Presidents Kim Dae-jung and Roh Moo-hyun.

The ruling party is no exception. Last May, a deplorable incident occurred in the National Assembly.

However, it was only attended by five officials, including National Assembly Speaker Chung Ui-hwa; Rep. Kim Han-gill, the chairman of the Korea-Russia Inter-Parliamentary Council; and Rep. Woo Yoon-keun, who studied in Russia.

Korean lawmakers are so ignorant about Russia’s rising influence on North Korea amid the estranged relationship between North Korea and China. Furthermore, Russia’s role in the unification process accounts for a fourth of the support by the four major powers.

What about our government? Paralyzed by “principle,” the government cannot make progress in high-level inter-Korean talks. It’s a matter of asking what we want, including regular family reunions, after boldly resuming the tourism program on Mount Kumgang, a prerequisite the North demands.

The reason why Japanese Prime Minister Shinzo Abe conceded to Korea despite an expected backlash from the Japanese right wing is because he had a firm desire to persuade conservatives, his political support base.

The Korean public’s indifference about peace and unification is another reason why the government has succumbed to indolence and formalism. Basic education that explains why peace is essential, how unification can be achieved and how Germany persuaded its neighbors to agree to unification isn’t even a reality.

Otto von Bismarck once said that a “statesman cannot create anything himself. He must wait and listen until he hears the steps of God sounding through events, then leap up and grasp the hem of his garment.”

The government must improve the relationship with North Korea based on a practical stance, and civil society must prepare future generations for peace and unification through education. This is why the JoongAng Ilbo will start its 2016 Peace Odyssey.

The JoongAng Ilbo greets the new year with the determination that we will participate in providing humanitarian support to the North, and focus our effort and resources to spreading awareness about the importance of peace and unification to students and citizens.