New legislation is put forth to set history straight

New legislation is put forth to set history straight 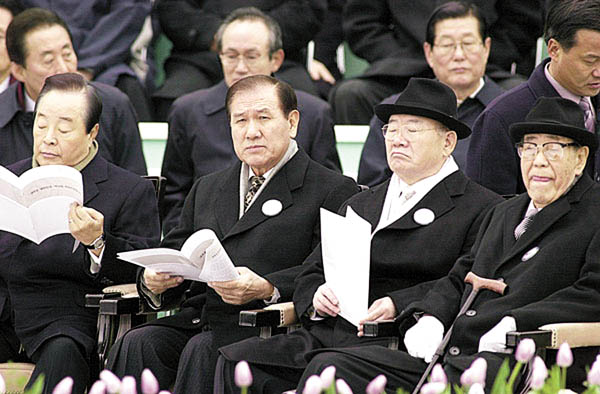 Kim Young-sam, far left, sits with former Presidents Roh Tae-woo, center, and Chun Doo Hwan during the inauguration of Roh Moo-hyun on Feb. 25, 2003, at the National Assembly in Seoul. It was the last time the three were gathered together. [JOONGANG PHOTO]

During the first two years of Kim Young-sam’s reign, I wasn’t happy with his dogmatic perspective on history. But I did credit him for his ability to react quickly and decisively when the time called for it.

Just 10 days after his inauguration, he moved swiftly to dismiss Army Chief of Staff Kim Jin-young and Defense Security Commander Suh Wan-soo - a move that no one had foreseen. The two generals were core members of a military clique known as the Hanahoi, founded by former President Chun Doo Hwan.

The military faction exploited its influence thanks to its connection with two former presidents and focused on promotions and its personal interests in the military. To put an end to this practice, the president called in the defense minister and notified him of Kim and Suh’s dismissals. 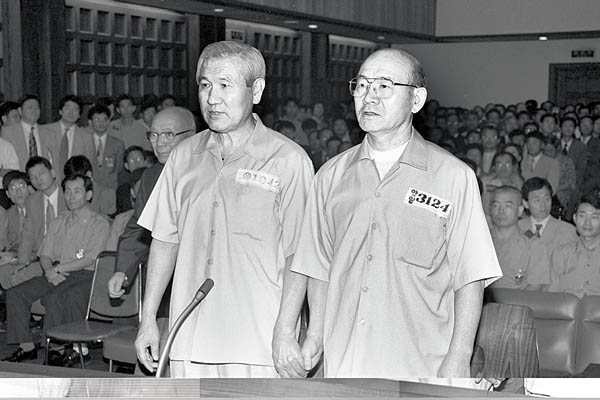 Chun Doo Hwan, right, and Roh Tae-woo await a verdict during the first court trial on Aug. 26, 1996. Chun received the death penalty while Roh was sentenced to 22 years and six months in prison for treason and rebellion. The terms were later commuted and they were released from prison after about two years in confinement via a special presidential pardon in December 1997. [JOONGANG PHOTO]

Kim Young-sam immediately began his search for new personnel and announced his appointments later that day - a move that illustrated his boldness and assertiveness when making decisions. During a meeting with senior journalists in the afternoon, Kim stressed that he would be a “revolutionary president,” in sharp contrast to his predecessors.

“Were you not surprised by what I did that day?” he asked. “Defense Minister Kwon Young-hae was dumbfounded when I told him to fire the generals. I called in their successors to the Blue House to officially appoint them for the positions and ordered them to take over complete control of their units. It was directly intending to strangle the Hanahoi and bar it from backlash.”

It took him four hours and five minutes from the moment he told Kwon of his decision to issue formal appointments, he pointed out. In less than a month, he also successfully ousted and replaced a line of other military officials in the Hanahoi faction.

As Hanahoi members benefitted, the unity within the military eroded.

But to this end, Kim should be credited with once and for all eradicating Chun Doo Hwan’s notorious bloc. Not only did he dissolve the Hanahoi, he sent Chun and Roh Tae-woo to prison for the coup they orchestrated against the state on Dec. 12, 1979, which effectively put an end to the power struggle inside the military.

Looking back, ridding the political sphere of such detrimental elements wouldn’t have been possible were it not for Kim Young-sam. His leadership and judgment style was straightforward and instinctive.

His archrival Kim Dae-jung, on the other hand, was more calculated and contemplative when it came to making policy decisions. Many said the former had more intuitive political skills while the latter was better at producing political outcomes to his advantage.

I believe that assessment is correct.

Kim Young-sam was always resolute in pushing for his objectives against all odds. In that sense, he was able to put two former statesmen before judges in blue prisoner uniforms, a historic scene broadcast all around the world. If Kim Dae-jung had been in power at that time, the outcome may have been entirely different.

When Chun and Roh were imprisoned, I was the chairman of the minority opposition United Liberal Democrats. Roh was detained in November 1995 after he was implicated in a bribery scandal and Chun was put in jail on charges of insurrection under martial law for his leading role in the 1979 coup.

Heeding rising public demand that the two be held legally accountable, Kim submitted a special bill in regard to the Gwangju Uprising on May 18, 1980, and the 1979 military coup. The Special Act on the Gwangju Democratization Movement allowed the two to still be prosecuted, suspending the statute of limitations for the charges against them.

“From now on even a coup that succeeds in taking over power will be subject to legal punishment,” Kim proclaimed after the act’s passage. “No one will dare to usurp power by force on this land anymore.”

Their convictions were inevitable. But at the time, I was against Gwangju Act on the grounds that it was applying retroactive legislation, which I found unconstitutional.

I also objected it to because it meant other national leaders could have potentially resorted to applying laws retroactively whenever there was public demand for it, which would weaken the rule of law.

“The Special Act on Gwangju Democratization Movement is the classic of populist legislation. … I object to any enactment of laws that aim for retroactive application,” I declared.

But as Kim pushed for the Gwangju Act to be passed, the political circle found itself consumed by bribery allegations.

Former President Roh was alleged to have amassed 400 billion won in slush funds, and opposition leader Kim Dae-jung was accusing Kim Young-sam of having spent more than 1 trillion won on his presidential campaign, most of which had come from Roh’s reserves.

To apply further pressure on Kim Young-sam, Kim Dae-jung admitted that even he had received 2 billion won from Roh for his campaign.

In the face of snowballing allegations, the president kept silent. Instead, he came up with the Gwangju Act to deflect the criticism and use it to his advantage.

As far as I know, Kim saw his own use of secret funds as simply a means to meet his personal agenda.

Common principles, he believed, should apply differently to different people.