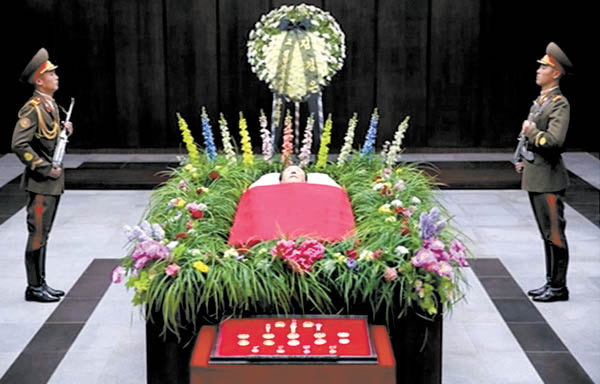 The body of Kim Yang-gon, 73, the director of the United Front Department in charge of inter-Korean affairs, lies in repose at a mortuary in Pyongyang before a wreath offered by North Korean leader Kim Jong-un. [NEWSIS]

The death of one of North Korea’s most senior officials last week in a fatal car accident came as a surprise to observers in the South.

For years, Kim Yang-gon led inter-Korean dialogue for Pyongyang and was one of only a handful of officials who had visited the South multiple times.

He was also known among South Korean officials for his logic and negotiating skills.

The veteran diplomat’s fate was far from expected and has since sparked speculation about the nature of the accident in the early morning hours on Dec. 29. 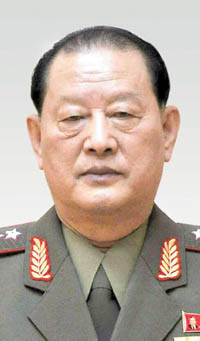 The only official information released regarding Kim’s death was a report by the state-run Korean Central News Agency a day after the incident.

The media outlet reported that the 73-year-old died at 6:15 a.m. on Dec. 29 in a fatal automobile accident. However, it did not provide any more details concerning who may have been responsible or who was behind the wheel, leaving many questions unanswered.

The lack of clarity fueled skepticism over whether the cause for Kim’s death was as simple as it sounded or whether more sinister forces were at play, especially considering that a number of senior North Korean officials have died in car accidents over the past decade.

Kim Yong-sun, the director of the United Front Department of the ruling Workers’ Party, reportedly died in a car accident in October 2003; while Ri Je-gang, the senior deputy director of the Organization Guidance Department, met a similar fate in June 2010.

Both lost their lives at the peak of their struggle for power.

Kim Yong-sun found himself politically cornered at the time of his death, which came just after South Korea launched a special investigation looking into an illegal money transfer to Pyongyang before the first inter-Korean summit in 2000.

Ri, on the other hand, was involved in a dispute with Jang Song-thaek, the late uncle of current North Korean leader Kim Jong-un. Jang was executed in December 2013 after a treason conviction.

While the South Korean government has said it has no reason to believe Kim was intentionally killed, he had reportedly clashed with Gen. Kim Won-hong, the state security minister, in the lead-up to his death.

Speculation is that the two men may have argued after a performance by the North Korea’s Moranbong Band in Beijing was abruptly cancelled just hours before a scheduled concert last month. At the time of his death, Kim Yang-gon was serving a dual role, also as the head of the party’s international department.

Chinese authorities were reported to have directed their complaints over the mishap to the international bureau of the Workers’ Party. The soured note between China and North Korea could have added to tensions between Kim Yang-gon and Kim Won-hong, who as director of the security department had a vested interest in improving ties with Beijing.

Kim Won-hong was also reported to have investigated Kim Yang-gon’s conduct during a meeting with his South Korean counterpart to negotiate high-level talks in Singapore in 2009, when Kim Yang-gon was said to have begged for an agreement on the issue.

In his memoir, “The President’s Time 2008-2013,” former President Lee Myung-bak wrote that Kim had insisted he would face a death penalty if he returned to Pyongyang empty-handed.

Purges of North Korean senior officials involved in the preparatory talks followed the publication of Lee’s memoir. Among the anecdotes included in the book was Kim Yang-gon’s plea for tangible results, a revelation that might have raised the ire of the North Korean regime.