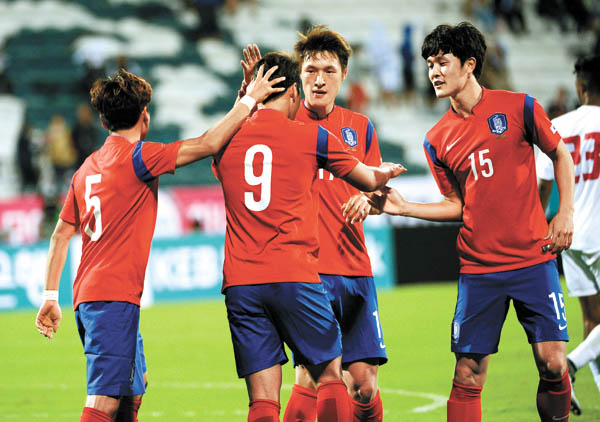 Korean players congratulate forward Hwang Hee-chan, second from left, after he scored the second goal against the United Arab Emirates in a friendly match in Dubai on Monday. Korea won 2-0. [AP/NEWSIS]

The Korean men’s under-23 football team made a good start to 2016 by blanking the United Arab Emirates 2-0 in Dubai on Monday in a tuneup match for the Olympic qualifying tournament next week.

At the Maktoum Bin Rashid Al Maktoum Stadium, Korea’s Olympic squad was able to put away two goals in the second half thanks to goals by midfielder Lee Yeong-jae and forward Hwang Hee-chan.

Since this was a preparation match for the 2016 Asian Football Confederation U-23 Championship in Qatar, which also serves as the Asian qualifying tournament for the 2016 Summer Olympics in Rio de Janeiro, Korea team coach Shin Tae-yong was focused on testing various tactics.

Shin began by benching most of his usual starting members and came out with a 4-3-3 formation, putting three forwards up front. In the second half, the young Taegeuk Warriors replaced 10 players and changed to a 4-4-2 formation by putting two strikers up front, leaving a diamond-shaped midfield.

Korea broke the deadlock in the 51st minute after Lee Yeong-jae received a pass from Jin Seong-uk and found the net with his right foot. In the 88th minute, Hwang Hee-chan, the 19-year-old who plays for Austrian club FC Red Bull Salzburg, converted midfielder Kwon Chang-hoon’s cross to make the score 2-0.

“We had difficult moments, but I think players gained confidence after we were able to convert our chances toward the end,” coach Shin was quoted as saying by the Korea Football Association.

Shin said that since this is preparation match and can be watched by its opponents at the tournament, he tried not to display the team’s highest level of performance on the pitch, although getting a victory is necessary.

“I’m happy that we got a good result even though we didn’t show our ability at the full level,” he said.

Korea will have its final tuneup with Saudi Arabia on Thursday before entering the Olympic qualifying tournament. Shin said he will use a similar strategy against the Middle Eastern nation, testing tactics and players.

At the AFC U-23 Championship, Korea is paired with Uzbekistan, Iraq and Yemen in Group C. The team first faces Uzbekistan on Jan. 13, followed by Yemen on Jan. 16 and Iraq on Jan. 19.

The top three teams among 16 countries will earn their ticket to Brazil.