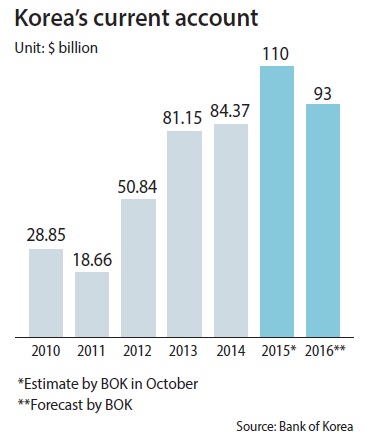 Korea posted a current account surplus of $9.4 billion in November, hitting a new record for the 45th month in a row.

Unlike in good times, however, a record current account surplus is not something to celebrate but something to fear. What it means is that Korea’s imports are falling much faster than its exports, which declined every month last year.

According to Bank of Korea data released on Tuesday, exports in November were $44.38 billion, down 4.8 percent compared to a year earlier. Imports shrank 17.6 percent year on year to $34.06 billion.

“The main culprit was the price of crude, which started tumbling in 2015,” said Park Seung-hwan, a director of financial statistics at the Bank of Korea. “Exports shrank slightly in petrochemicals and intermediary materials, but imports declined even faster as prices of raw materials and crude tumbled the most.”

The current account for 2015 will reach $110 billion, the Bank of Korea estimated in an economic outlook released in October. That was $12 billion larger than a July estimate, as raw material import prices slid drastically in the second half of last year.

The good news is that a large current account surplus helps Korea’s foreign exchange reserves, which will be helpful if foreigners pull money out of the local financial market due to global uncertainties or the strengthening dollar.

But economists still describe a “recessionary current account surplus,” in which sluggish domestic demand results in substantially faster shrinkage in imports than in exports.

The outgoing deputy prime minister for the economy, Finance Minister Choi Kyung-hwan, acknowledged the downside of the surplus at a meeting with businesspeople last January.

“An excessively high current account surplus may result in strengthening of the Korean won against the U.S. dollar, [which weakens Korean exports’ competitiveness], so the government will try to bring down the size of the surplus,” Choi vowed.

But there was little the government could do, considering external circumstances like oil prices and the weakness of the local economy.

Lee Jun-hyup, chief macroeconomic researcher at the Hyundai Research Institute said, “The Middle East respiratory syndrome drastically froze consumption and hit the domestic economy so hard that it almost offset the ability of a supplementary budget to lift the economy.”

The situation in 2016 will not be much better, analysts said. But the government and central bank stuck to rosy outlooks.

The central bank predicted that Korea will be able to shave the current account surplus to $93 billion this year as domestic demand helps close the gap between imports and exports. The Ministry of Strategy and Finance suggested a $98 billion surplus.

However, major private research institutes expect the country to see a current account surplus at a similar level as 2015, mainly because crude prices are forecast to keep declining.

“The current account surplus will stay very high in 2016,” LG’s institute wrote. “The remaining crude price risk will allow the goods account surplus to rise even higher, and the service account deficit, which will be bigger because of a shrinkage in the Middle East construction market, can’t bring down the surplus size.”

“What’s more scary this year is sluggish exports [to oil and raw material producers], which makes companies unable to invest or hire domestically,” said Lee from the Hyundai Research Institute.

LG’s institute warned that the government should try harder to reduce the current account surplus. But it released a dim view of the domestic economy.

“This year, construction companies will keep investing to meet the presold housing demand nationwide, but the local housing market is expected to slow down soon due to oversupply [which brings down inflation and consumption],” the institute wrote in a report.