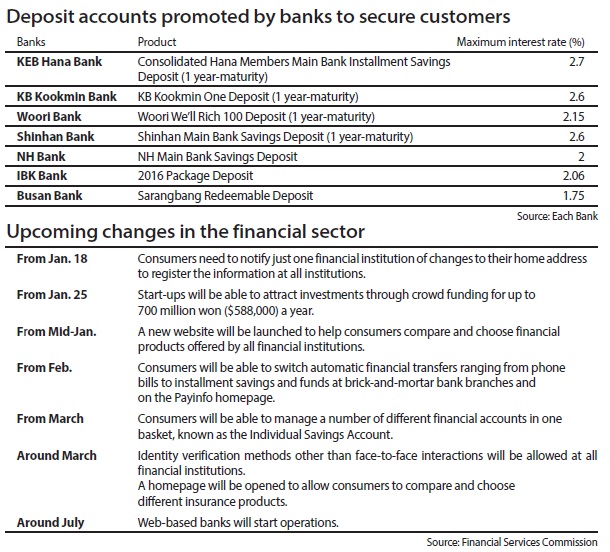 This year is expected to be critical for the financial authority to cement its financial reforms, with as many as eight changes possible if all goes smoothly.

Most of the changes planned by the Financial Services Commission (FSC) aim to improve convenience for consumers by making traditional banks borderless through combining current financial services with cutting-edge technologies under the much-touted fintech initiative.

Starting in February, consumers will be able to shift their primary accounts, which are used for receiving salaries and paying a variety of bills, from one bank to another at all brick-and-mortar bank branches across the country.

Since October 2015, consumers were able to do so by accessing Payinfo (www.payinfo.or.kr), an integrated website created by the Korea Financial Telecommunications & Clearings Institute for management of automatic financial transfers of insurance, phone and credit card bills.

The FSC first introduced the system in July and has been expanding it.

From next month, consumers will be more free to switch to another bank both online and offline. Not only credit card or phone bills, but also transfers for funds, housing rent and interpersonal remittances can be handled on the Payinfo website or at each bank branch in the real world.

From June, the system will further expand to cover newspaper bills and cram-school payments.

“As much as 90 percent of an individual’s automatic financial transfers can be moved from one account to another,” said Lee Yun-su, director for bank policy at the FSC.

Such a change is expected to intensify competition among commercial banks. Major banks are now trying new promotions to attract more customers in response to the expansion of the new system, increasingly desperate in part because web-based banks will start operations later this year.

Traditional banks are keeping their current customers by offering them higher interest rates.

KB Kookmin Bank and Shinhan Bank offer up to 2.6 percent in a similar manner.

State-run and provincial banks are following suit. The Industrial Bank of Korea, a state-run bank specializing in small and medium-sized businesses, has launched a special product for this year called the “2016 Package Deposit,” which offers up to 2.06 percent. Busan Bank also offers a maximum 1.75 percent for customers subscribing to its Sarangbang Redeemable Deposit.

In response to the debut of web-based banks, existing banks are also preparing to offer mid-range loans. Internet banks are set to provide loans at around 10 percent interest rates for consumers with credit ratings below level five, a group traditionally ignored by commercial banks.

“Current banks will have no choice but to enter the mid-range loan market in order not to lose ground in the microfinance field,” said Son Sang-ho, a research fellow at the Korea Institute of Finance. “This trend would expand to second-tier savings banks, too, which will give consumers a variety of loan programs.”

Banks are also showing off their creativity by introducing unique products.

Woori Bank, for example, has come up with a credit line program tailored for phone and utility bills. When the deposit balance bottoms out, the account automatically turns into a credit line for paying those bills.

“As the competition among banks gets fiercer, more unique and differentiated products and services will be developed,” Lee said.