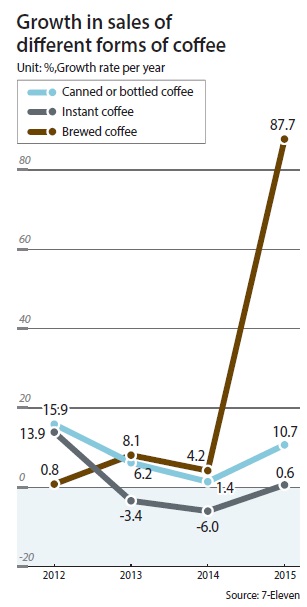 Koreans love their coffee - but they’re loving it in different ways.

The market was once dominated by franchise coffee shops like Starbucks and the Coffee Bean & Tea Leaf, but more people are heading to convenience stores, especially since they started selling quality coffee at low prices.

Local convenience stores such as CU, GS25 and 7-Eleven are aggressively expanding their offerings of brewed coffee. Korean adults consumed an average of 341 cups of coffee in 2014, up 14.4 percent from the previous year, according to Statistics Korea. To put that into perspective, the average Korean consumed seven bowls of rice a week, 11.8 portions of kimchi - and 12.8 cups of coffee. Coffee has arguably become more important than kimchi.

Industry insiders believe that the coffee market was worth about 6 trillion won ($5.06 billion) last year and that it has been growing 10 percent per year. Convenience stores’ coffee sales accounted for about 40 billion won last year, but that is expected to grow to 100 billion won this year. 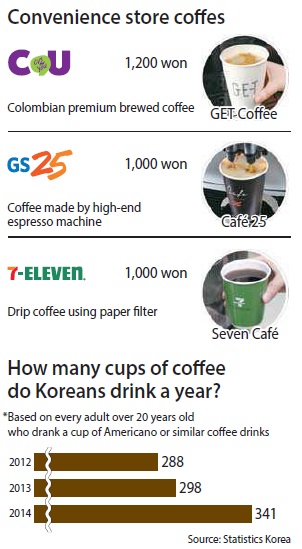 As coffee becomes indispensable, the previous prejudice of coffee being too expensive is disappearing. In fact, the local coffee market has polarized significantly. There are shops that sell premium coffee priced over 10,000 won, while a cup at a small cafe is priced at around 1,000 won.

“Convenience stores usually sell takeout coffee, which saves them from having to pay for space for customers to sit in,” a representative of CU said, “and this is why they can sell quality coffee at low prices.”

It seems that 1,000 won coffee will shake up the market this year. Korea Seven Company, which manages 7-Eleven, held a commencement ceremony for the year 2016 at its coffee roasting factory in Pyeongtaek, Gyeonggi, on Monday. The factory makes coffee beans that are used in 7-Eleven in-house coffee sections, which are called “Seven Cafe.” The company was the first among local convenience stores to enter the in-house coffee shop market last January.

“We will try as hard as possible to make Seven Cafe the most beloved coffee shop in the nation with its high quality products,” Korea Seven CEO Jung Seoung-in said. “We plan to expand our 1,000 Seven Cafe stores to 3,000 this year.”

Seven Cafe makes drip coffee using paper filters, and its sales rose 87.7 percent within a year of its launch. That growth rate is way above that of other coffee products, including canned and bottled coffees, which rose 10 percent last year.

CU launched its coffee brand “GET Coffee” last December. The company imports beans straight from farms in Tanzania and Colombia and sells high-quality coffee for 1,200 won a cup.

“We use the City-degree roasting technique, which allows coffee to have full flavor even when it cools off a bit,” said Ko Min-ki, a manager at BGF Retail, which owns CU. “The company takes care of every part of the process, from importing beans to roasting.”

GS25 even placed Swiss-made espresso machines worth 10 million won a unit in every store. The company launched “Cafe 25” to allow customers to enjoy premium coffee in its stores.

“We can make a cup of Americano within 40 seconds and have established a quality control system at each store,” said Cha Hyun-min, a representative of GS Retail.

“Convenience stores are growing fastest in this area,” a business insider said, “and more and more people will look for coffee sold in these stores as they are now favoring more reasonably priced products.”