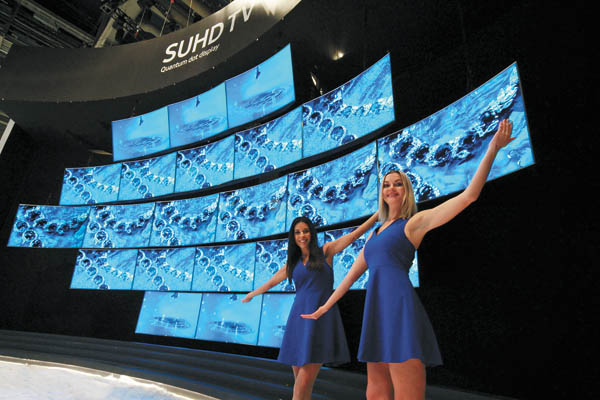 Samsung Electronics mounts its super ultra-high-definition TVs to the wall of its booth at the 2016 Consumer Electronics Show in Las Vegas. [SAMSUNG ELECTRONICS]

“Connectivity” in consumer goods has been a buzzword at international consumer electronics fairs in the past couple of years, but it has typically sounded like a vague and distant fad.

At the 2016 Consumer Electronics Show, however, Korean companies are sending a clear signal that the Internet of Things (IoT) is poised to become a part of daily life.

Samsung Electronics and LG Electronics, the two biggest consumer electronics producers in Korea, held the biggest spaces among all exhibitors at the annual show in Las Vegas, which runs through Jan. 9. They used the room to demonstrate how their home devices connect to each other through the Internet and operate organically according to users’ needs.

Samsung showed off its open IoT platform SmartThings, acquired in 2014, which allows users to control other smart home devices.

“Applying SmartThings into current household devices is a major step forward that will make it much easier for everyone to experience the benefits of a smart home,” said Alex Hawkinson, CEO and co-founder of SmartThings. 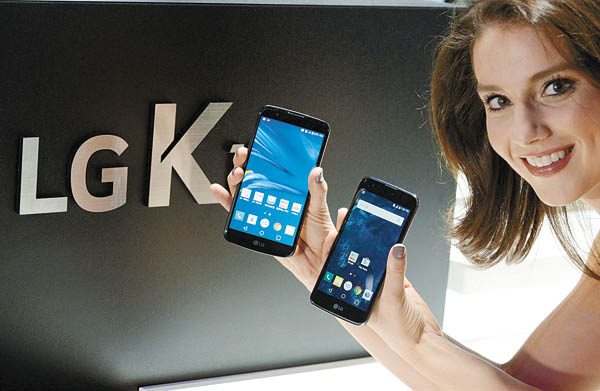 At Samsung’s SmartThings booth, visitors are shown how they can monitor in and outside their house through a camera linked to Samsung’s ultra-high-definition TVs, which utilize quantum dot technology - a first for the company. Guests at the booth are also able to control the lighting and other devices depending on what they play on their TVs, and can see how new refrigerators go beyond serving as just a means of preserving food by placing orders for ingredients that have run out.

SmartThings works with some 200 devices, as Samsung has forged an array of partnerships with other producers and service providers.

LG’s own smartThinQ platform will connect appliances at home through a smartphone app that facilitates two-way communication. On the hub’s 3.5-inch color liquid crystal display, users can also see reminders from their calendar or play music from a built-in speaker. 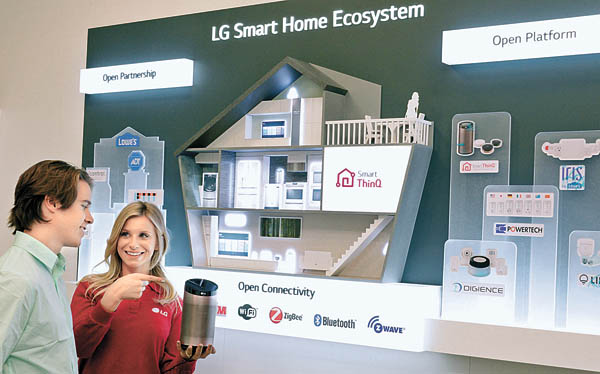 LG Display on Monday attracted a frenzy of attention when it announced its prototype for an 18-inch organic light-emitting diode (OLED) display that rolls up like a piece of paper - the first of its kind and a step beyond existing curved displays. It indicates that Samsung’s domestic rival envisions the futuristic rollable screens as a key way to differentiate LG products, such as smartphones, TVs and even cars, from its rivals.

LG Electronics is also using the Consumer Electronics Show as a chance to debut a paper-thin 55-inch OLED TV display and a pair of 65-inch OLED displays with “extreme” concave and convex curves.

Some 30 smaller Korean companies also set up booths at the fair as a foray into international markets.

Coway, a leading water and air purifier producer, is showing off an array of its latest household products. The company’s IoCare air purifier is able to provide 16 different options depending on the air quality and environment, such as high level of moisture or fine dust, which has been made possible by the company’s analysis of some three billion pieces of big data on household air.

Cammsys, an electronic parts maker, is unveiling a high-definition monitor that offers a 360-degree viewing angle for use with automobile dash cams.