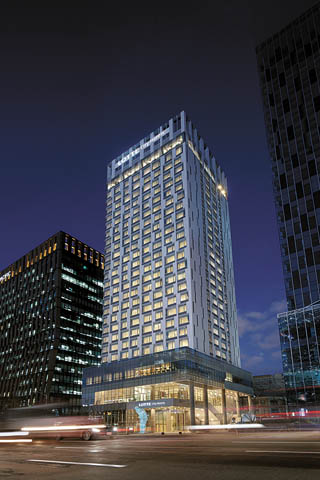 Lotte Hotels & Resorts is banking on cutting-edge technology that allows for smart controls when it opens its mid-range Lotte City Hotel Myeongdong in central Seoul today.

The company wants to carve out its own niche amid stiff competition in budget hotels to attract younger, tech-savvy customers. Both local hospitality players like Hotel Shilla and multinational chains like Starwood Hotels & Resorts Worldwide, Ambassador and Accor are bulking up their mid-scale brands in Seoul and other big cities.

As the seventh property of the Lotte City brand, the Myeong-dong branch boasts the largest number of rooms among the chains, with 430 guest rooms.

“With its competitive location near Myeong-dong and Gwanghwamun, we will serve both business travelers and tourists,” said Hong Sung-jun, general manager of the Lotte City Hotel Myeongdong.

The big selling point of the 27-story property is the smart control system that enables customers to request various services and control lighting, the temperature and television channels via a smartphone application.

To offer a smart TV control service, Lotte collaborated with LG Electronics and installed LG “smart” TVs in every room.

Many multinational hotel chains have adopted such smart controls, but Korean operators have been slow to embrace advanced technology in connecting services with smart mobile devices.

The hotel will also provide tourism information and tips about the use of hotel facilities via the app.

“Through a service called ‘Mirroring,’ we will allow users to connect smart devices with digital machines in the room so that they can listen to music saved on their phone,” the general manager told the Korea JoongAng Daily on the sideline of a press opening event on Tuesday.

Only a few hotels offer tech-driven guest services, and the most comparable is the Aloft Seoul Gangnam.

The hotel offers a smartphone-enabled check-in system, and a system called “SPG Keyless” allows guests to unlock their hotel rooms with a simple wave of their smartphone.

Along with the digitalized offerings, the Myeong-dong hotel is aimed at convenience and accessibility. It offers complimentary shuttle service to Seoul Station for guests using the Airport Express line.

The hotel will also run a baggage delivery service that sends guests’ luggage straight to the airport.

The first Lotte City Hotel in Mapo District opened in 2009, and the hotel chain extended its reach by opening overseas properties.

The latest abroad was the Lotte City Hotel Tashkent Palace in Uzbekistan that opened in 2013.