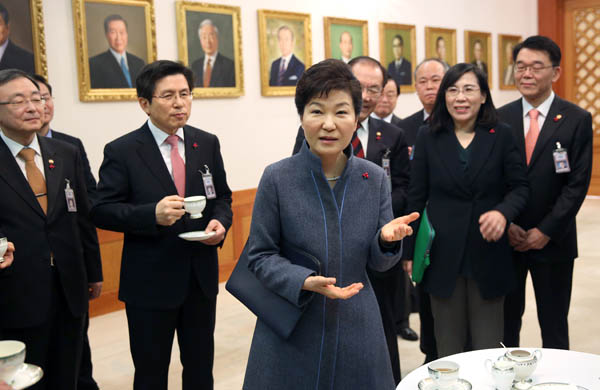 President Park Geun-hye vowed Tuesday at her first Cabinet meeting of 2016 to achieve everything she could for the people and the country during the remainder of her term.

This year marks the fourth of her five-year administration.

The president issued lengthy opening remarks at the meeting to emphasize her determination to push forward reform agendas.

In her 15-minute statement, Park said she had done her best to tackle touchy issues neglected by past administrations.

She highlighted what she called her most difficult tasks, which included reforming the debt-ridden pension plan for public servants, arranging a grand compromise between the labor and business communities to introduce more flexible employment systems, signing a free trade agreement with China and striking a deal with Japan to settle the long-running dispute regarding its sexual enslavement of Korean women during World War II.

However, she went on to say that the government still needed to complete other reform initiatives and boost the employment market to revive the economy.

Rooting out corruption was also pinpointed as a key objective for this year. Korea’s ministries, the president said, must work hard to eradicate corrupt practices and establish a monitoring system to prevent budget waste and improve transparency and fairness in major state projects.

“North Korea has vowed to work toward the objectives outlined in the agreement [reached between Seoul and Pyongyang on Aug. 25], so we must work hard to normalize inter-Korean relations,” she said.

She also lamented the legislative standstill over key economic and labor bills. “Five days have already passed in the New Year, but these bills are still stalled at the National Assembly,” the president said. “If the National Assembly completes its session without passing them, the door for new jobs for young people will close, and so will the future of Korea.”

The government’s executive right, she said, and the National Assembly’s legislative right were delegated by the people. “It is therefore, the duty of the government and the legislature to serve the people with an endless [sense of] responsibility,” Park said.

Her remarks appeared to be an ultimatum to the National Assembly, especially considering the legislature is scheduled to conclude its extra session on Friday.

The president has repeatedly demanded that key economic bills be passed, but no progress has yet been made.

For that reason, speculation has grown recently that Park may invoke an emergency order under the Constitution. Ruling Saenuri Party leaders, including Chairman Kim Moo-sung, said last month that the president had been left with no choice but to consider making an emergency financial and economic order, with the bills stuck due to resistance from the opposition.

The Blue House, however, denied that it was reviewing the possibility of issuing an emergency executive order.

Clause 1, Article 76, of the Korean Constitution states: “In time of internal turmoil, external menace, natural calamity or a grave financial or economic crisis, the president may take in respect to them the minimum necessary financial and economic actions or issue orders having the effect of law, only when it is required to take urgent measures for the maintenance of national security or public peace and order and when there is no time to await the convocation of the National Assembly.”

The measure was last put into effect 23 years ago by President Kim Young-sam to introduce the real-name financial transaction system. Five days after the order was issued on Aug. 12, 1993, the National Assembly formally passed it into law.

The Blue House has been pressuring National Assembly Speaker Chung Ui-hwa to use his authoritative power to introduce the economic bills directly for a vote, without them having to make their way through standing committees.

However, Chung has refused to budge, arguing that the current National Assembly Act only allows such a proceeding when the ruling and opposition parties agree to it.

“The bills were once agreed upon by both sides,” a presidential official said. “The situation is desperate, so we asked him to introduce them first. Chung appears to be using the situation to promote the image of himself as a politician of principles.”

Chung said Tuesday that he had no choice but to turn down the president’s demand. “The law doesn’t allow me to do this,” he said. “I cannot do it, even if I wanted to.”

“It’s wrong for the Blue House to criticize him because his hands are tied by the law,” one of the speaker’s associates added. “He agrees more than anyone about the importance of the bills. He’s arranged nine negotiations so far to resolve the deadlock.”