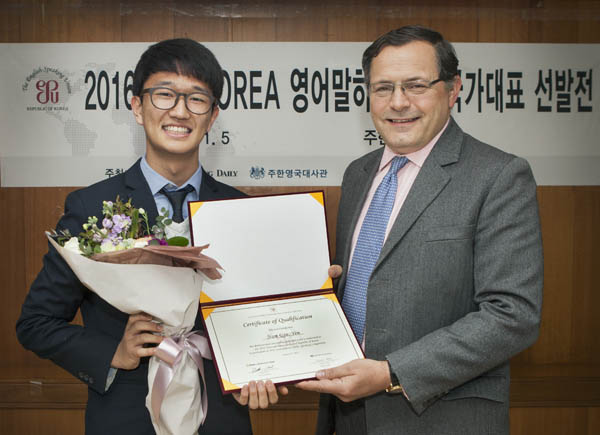 Yim Nam-gyu, left, is named by British Ambassador Charles Hay on Tuesday as the Korean contender for the upcoming ESU Public Speaking Competition at the British Embassy in central Seoul. [PARK SANG-MOON]

Yim Nam-gyu, who attends Goyang Foreign Language High School, was selected on Tuesday as the Korean contender for the 35th English-Speaking Union (ESU) Public Speaking Competition to be held in London in May.

Yim will compete against some 80 contestants from roughly 50 countries during the five-day program, with the hope of being recognized as one of the world’s most eloquent non-native English speakers.

Co-hosted by the Korea JoongAng Daily and the British Embassy in Korea, the English-speaking competition is sponsored by Britain’s Queen Elizabeth II and the Hong Kong and Shanghai Banking Corporation.

“I can’t believe I just won,” said Yim, a soon-to-be high school senior who lived in the United States for five and a half years.

He advised future contestants to focus on brainstorming. “If you set your mind on just one idea and later end up losing interest in it, you’ll be completely helpless. Try to come up with a lot of arguments you can later replace your original idea with,” he said.

At Tuesday’s final contest, held at the British Embassy in central Seoul, the teens each presented a five-minute prepared speech on the topic, “The most common way people give up their power is by thinking they don’t have any.”

Both were given a choice of topics for extemporaneous speeches, with three minutes each. Fifteen minutes of preparation in a private room was afforded to each finalist.

Yim chose the topic, “Is it fair for students to rate their teachers?” while Park selected, “Is formal education necessary for everyone?”

“It helps promote a better learning environment,” Yim said. “Students have the right to rate their teachers” because they are part of a society that pays taxes, which finances teachers’ salaries. In that sense, students have the “right” to judge such services, he stressed.

British Ambassador Charles Hay remarked that he was pleased to see the high level of interest among Koreans in learning English, and that he, too, understood the difficulties involved in picking up a foreign language now that he is learning Korean.

Applications for the 11th ESU Korea Public Speaking Competition will be accepted until Jan. 20. For further information, visit www.esukorea.org or call 02-2031-1223.