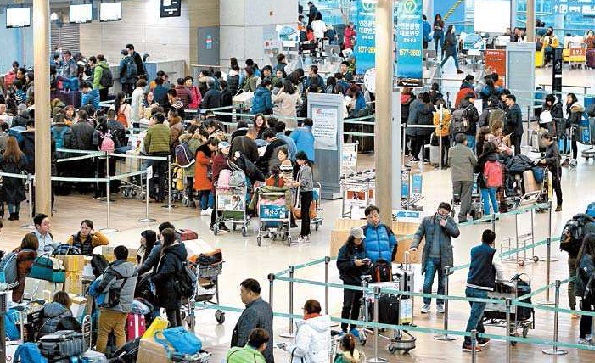 Passengers line up to check in at the departure terminal in Incheon International Airport on Tuesday after the airport experienced delays of 159 flight departures due to a jammed baggage handling system on Sunday. [SHIN IN-SEOP]

It’s unlikely to bag that award this year after screwing up the handling of thousands of bags on Sunday, the final day of the New Year holiday weekend.

A total of 159 flights on Sunday were delayed because of problems getting bags loaded. Bags that were supposed to go to Washington D.C. ended up in Hong Kong. About 5,200 pieces of luggage didn’t travel on the same plane as their owners.

But all was back to normal on Monday, and by Tuesday, all bags were reunited with their owners.

The Incheon International Airport Corporation (IIAC) said on Tuesday that the airport’s baggage handling system (BHS), which can handle 12,600 pieces of outbound baggage per hour, was jammed between 7 a.m. and 10 a.m. on Sunday as tens of thousands of bags overwhelmed it.

As of Monday evening, there were still about 600 pieces of luggage separated from their owners.

Incheon Airport handled about 167,000 pieces of baggage on Sunday, which came from 173,000 passengers taking 868 flights. The airport said the number of passengers and flights were all-time daily highs.

“We were short of manpower,” the IIAC said in a statement. “The baggage handling time by the BHS slows down in peak hours, just as highways experience traffic jams during rush hours. Fortunately, the BHS is operating normally now.”

The Incheon Airport Airline Operators Committee, consisting of 67 airlines that use the airport, are reportedly considering a lawsuit against the airport for compensation.

“So many aircraft had to take off without passengers’ luggage,” a committee spokesman said. “We will first see what kind of measures Incheon Airport comes up with to avoid similar cases.”

The fact that such a mess hasn’t occurred before is surprising to some. The passenger terminal of the airport was built to handle a maximum of 44 million passengers per year, but 45 million used the facility in 2014 and 49.3 million used it last year. More than 50 million passengers are expected to use the terminal this year, according to the IIAC. The company is finishing a second terminal.

Lack of leadership at the airport might also play a role. As with many state-run companies, the IIAC has been managed by politicians being rewarded for their loyalty with cushy jobs. Park Wan-soo, who was the IIAC CEO until December, is an ally of President Park Geun-hye.

The former CEO resigned from his post to run in the April 13 general election. Before he got the job, the position was vacant for seven months after his predecessor, Jung Chang-soo, resigned to run for Gangwon governor in February 2014.

The airport was supposed to be privatized by the Lee Myung-bak administration. The plan was canceled after rumors that the administration was trying to sell the company to raise funds to run its controversial four-rivers restoration project.