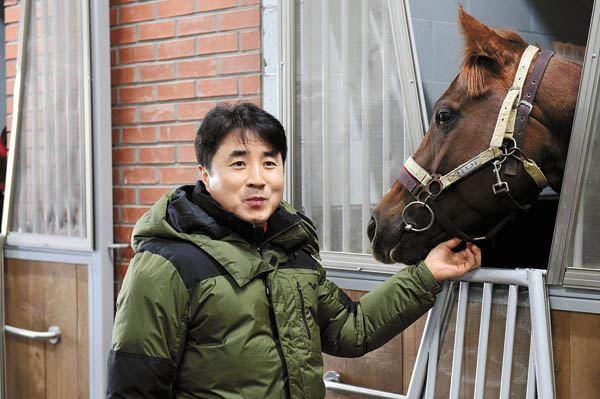 Trainer Seo In-seok and Cheon Gu. The horse is one of two from Korea to compete in the 2016 Dubai World Cup Carnival in the United Arab Emirates this week. [KOREA RACING AUTHORITY]

When the horse that would become the best in Korea was first put to auction in Maryland in 2014, few bidders were interested.

After all, the 2-year-old American-bred colt had trouble walking and was undersized.

But trainer Seo In-seok, who was attending the auction on behalf of Cho Geum-je, saw something else.

“I noticed that his eyes were bright,” Cho said.

Still, people ridiculed Seo’s decision to purchase the chestnut-colored colt, saying it was wasteful to bring an unimpressive horse to Korea when transport costs alone total 12 million won ($10,000). But owner Cho wasn’t bothered by the purchase. He later named the horse “Cheon Gu,” which means “sky sphere” in Korean.

These days, nobody’s laughing at Cheon Gu. The horse is representing Korea in the 2016 Dubai World Cup Carnival at the Meydan Racecourse this week in the United Arab Emirates. The event, which began in 1996, features 181 horses from 16 nations, with the winner taking home $6 million - the biggest purse among single horse racing events in the world.

Cheon Gu is already making history in Korean horse racing just by participating in the event.

Along with Success Story, they are the first Korean-managed horses to ever compete at the Dubai World Cup. Cheon Gu will begin the qualifying races on Friday for the 1,200-meter sprint with 13 other horses, while Success Story will compete in the 1,600-meter on Jan. 21. Cheon Gu needs to finish in the top five to advance to the next round.

Cheon Gu has had a bumpy road to get this far.

The first jockey to ride Cheon Gu refused to ride him again, as the horse had a limp in his left back leg. A subsequent examination showed Cheon Gu had a small fracture in his left pelvis.

But trainer Seo didn’t give up. The 47-year-old stopped training the horse and spent the next two months inspecting him. Seo found that Cheon Gu seemed to be uncomfortable when walking fast, but in a full-paced gallop, the horse had no problems at all, which gave him hope for an eventual recovery. When Seo determined that Cheon Gu no longer had pain when he moved, he resumed training.

According to Seo, Cheon Gu is a swift horse. Although he looks small, Cheon Gu weighs about 480 kilograms (1,060 pounds) just like other racehorses, meaning he’s well-muscled.

“Before the official race, we had a test race for him, and Cheon Gu finished fifth. But what’s interesting is that he sped up just before the final corner. Even though this horse is only 2 years old, Cheon Gu knew how to race,” Seo said, laughing.

On Dec. 6, 2014, Cheon Gu finally made his official debut at the Let’s Run Park in Seoul. He finished at the top in his debut race and went on to win four more times in seven races. In the three races Cheon Gu didn’t win, he finished second once and in third place twice.

As Cheon Gu become the top racing horse in Korea in just a year, its sire Old Fashioned was brought on a visit to Seoul in 2015.

Since his debut, Cheon Gu has begun competing outside Korea. In July, he competed at the Asia Challenge Cup in Singapore, and three months later raced in the Interaction Cup in Japan.

It isn’t easy for a horse to compete in international events. Not only does the horse need to go through a strict quarantine process, it also needs to be inside a trailer for a long time, which can create stress for the animal.

However, Seo said Cheon Gu is good at adjusting to new environments.

Cheon Gu, along with Success Story, already departed to the United Arab Emirates on Dec. 23. They will be ridden by local jockeys from the UAE.

“I see that whenever he competes in an international tournament, he gets better and better,” said Seo, who departed for Dubai on Monday.

“Cheon Gu’s best record in the 1,200-meter is 1 minute 11 seconds, but I think if he can finish within 1 minute 10 seconds, he can be at the podium. Since the dirt on the racing course is good, I expect good results from him.”