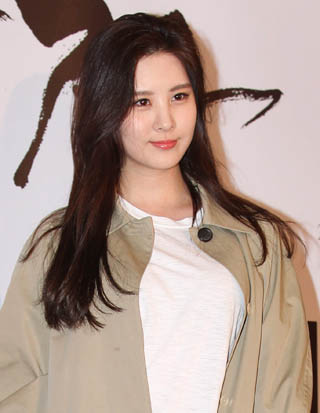 A person working at the drama department of a major broadcaster told Ilgan Sports, an affiliate of the Korea JoongAng Daily, on Wednesday that the 25-year-old singer finalized her supporting role in the drama series, which is set in both modern Seoul and China’s Qing Dynasty.

Seohyun will reportedly play a princess of the Hubaekje kingdom (892-936), but she later becomes a gisaeng, a professional entertainer in ancient Korea.

Seohyun has been doing musicals in addition to her singing career, but she is new to dramas.

Her first drama series was “Passionate Love” (2013), but she only appeared in a few episodes.

Seohyun debuted in 2007 as part of Girls’ Generation, but she has been expanding in various fields. She voiced characters for the animated feature films “Despicable Me 2” (2013) and “Despicable Me” (2010), and she has appeared in blockbuster musicals such as “Gone with the Wind.”

Meanwhile, “Moon Lovers,” which is based on a 2013 Chinese drama series, will feature Baekhyun of the K-pop boy group Exo.

U.S.-based entertainment giant NBCUniversal has invested in the drama series. It is the company’s first investment in an Asian drama series.

“Moon Lovers” will hit the air later this year.