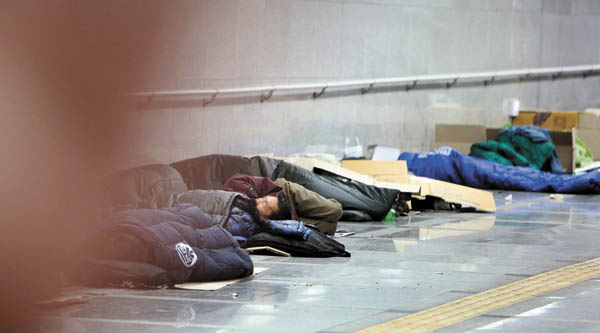 Christmas carols could be heard all around and salespeople promoted their bargains through bullhorns to catch the attention of passersby. Seoul Station Plaza bustled with people carrying bags of presents for family and friends on Christmas Eve.

Among the crowd, the people who spend the whole day squatting on the stairs or milling about the plaza wearing worn-out backpacks stood out. They were the homeless.

People may see the homeless as one of the most vulnerable groups of people, but the homeless with whom the JoongAng Ilbo met that day were not without hope.

Left to right: Park Bong-geun, 60, carries the Bible; Eom Geun-seob, 82, said he gains the strength to carry on whenever he wears his work shoes; Park In-su, 68, has about two dozen books. [JOONGANG ILBO]

The JoongAng Ilbo got an exclusive look inside the backpacks of 11 homeless people with their consent and gained insight into their difficult situations.

Park In-su, who has been living on the street for eight years, spent Christmas Eve watching passersby and reading while sitting on the concrete ground of Seoul Station Plaza.

Unlike other people in his situation, Park’s backpack was full of books.

Before Park began living on the street in 2007, he was an ordinary breadwinner of a four-member family.

He used to sell veggies on the street. He didn’t earn that much from the work, but he was getting by until his life abruptly changed.

“I lived in a small home with a 5 million won [$4,200] deposit and 200,000 won monthly rent with my wife and two children,” Park said. “One day, I reported my neighbor to the police because the neighbor was too loud, and later realized the neighbor was a gangster. That was the beginning of a disaster. The gangster threatened my family whenever I was out to work.

“My wife was suffering from a chronic disease, but the dispute with the neighbor worsened her condition. The children also left home and I lost contact with them a few years later. Since then, my life has gone downhill.”

Left to right: Jeong Gyeong-in, 59, guards against the winter chill using old newspapers; and the necessities for Seo Yong-ho, 59, include tangerines and some vitamin tablets, because he hopes to keep working at construction sites. [JOONGANG ILBO]

Park said his only pleasure in his life is books. Unlike other homeless people who often indulge in binge drinking, he collects books.

Every day is a struggle to survive for Park, but he reads for four to five hours on the street.

“I usually buy second-hand books from bookstores near Cheonggye Stream, paying 1,000 won or 2,000 won for a single book,” he said. “And then one day I found myself with hundreds of books.”

But it is difficult for Park to keep track of his possessions.

“I hid some of my books in the bushes at Yeouido Park but later found that somebody took all of them.”

That day, Park was carrying 20 books in his backpack. He had some classics such as Analects of Confucius, but most of his collection consists of how-to books.

“I hope I can leave the street someday and help people like me,” he said.

“My wish is to eat a home-cooked meal. If I could go back to the old days, I will work hard.”

Eom Geun-seob, who was spotted in front of a nearby homeless shelter, has been living without home for four years.

His backpack contained four pairs of safety work gloves, safety work shoes, some towels and a bottle of water.

When asked which object is the most precious among all his belongings, Eom chose the shoes without hesitation.

The work shoes were dusted with white cement.

“I’m already 80 and it’s hard for me to find work at construction sites,” he said. “I don’t know how long I can work but the shoes give me the strength to carry on.”

“I keep working at construction sites because I have a dream of having my own house someday,” he added.

Park Byeong-yeon, 55, had some leftover food such as rice, gimbap (rice rolls) and bread in his backpack.

“I carry food because we don’t know when we will eat the next meal,” Park said.

“If I could turn back time, I want to go back to the day when I used to live with my parents.”

Park used to make shoes, but he began living on the street after his parents passed away years ago. He said he has been trying to find a job recently.

“I don’t have any wish for the New Year. I just want to make shoes and make ends meet like I used to do in the past.”

According to the Seoul Metropolitan Government, 3,347 people stay at homeless shelters scattered around the city and 371 people live on the street. Of those living on the street, 171 live near Seoul Station.