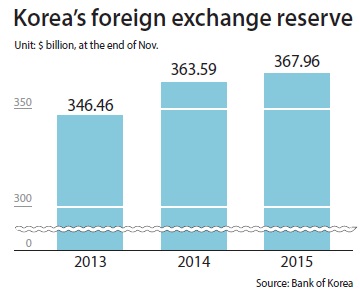 Korea’s foreign exchange reserves declined for the second straight month, mainly due to the weakening of currencies other than the U.S. dollar following the Fed’s rate hike on Dec. 17.

According to the Bank of Korea on Wednesday, the country’s December foreign reserves recorded $367.96 billion, down $500 million or 1.36 percent compared to the previous month.

“In November, foreign reserves shrank mainly due to the U.S. dollar’s appreciation in expectation of the upcoming rate hike announcement, resulting in most currencies except for the U.S. dollar depreciating,” Yang Yang-hyun, an official at the Bank of Korea, said.

“In December, different currencies showed different reactions, with the British pound, Canadian dollar and Chinese yuan depreciating, while the euro and yen slightly turned around after the announcement to appreciate slightly.”

However, the Bank of Korea assessed that a two-month decline was not meaningful because Korea’s foreign reserves have shown a growth trend over the past year.

The cumulative foreign reserves, from January to December, have grown by $4.4 billion, or a growth of 0.44 percent year on year.

With the rise, Korea became the world’s sixth largest in the size of foreign currency reserves last year, following China, Japan, Saudi Arabia, Switzerland and Taiwan. It replaced Russia, which fell to No. 7 due to the plunge in the price of crude.