For Bayern coach, England is next challenge

For Bayern coach, England is next challenge 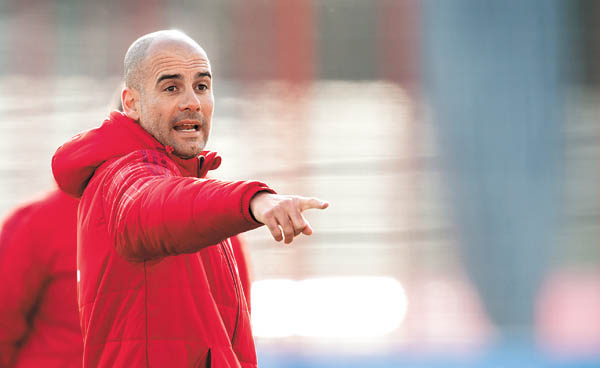 MUNICH - Pep Guardiola wants to coach in the English Premier League when he leaves Bayern Munich at the end of this season, but hasn’t yet signed a contract with a club.

“The reason I’m not staying at Bayern is very simple: I want to coach in England in the Premier League. That’s the only reason I’m not extending my contract,” Guardiola said on Tuesday. “I’m young enough. I’m 44-years-old. I want a new challenge.”

Having opted not to extend his three-year contract at Bayern, Guardiola expressed his thanks to Bayern and its chairman Karl-Heinz Rummenigge “because I know the club wanted to keep me, but at this stage in my career I need a new challenge. That’s it, nothing more.”

Guardiola, who took over Jupp Heynckes’ treble-winning side in 2013, led Bayern to the Club World Cup and UEFA Super Cup that same year, a German league and cup double in 2014, and another Bundesliga title in 2015.

The former Barcelona player and coach has been heavily linked with a move to Manchester City but he said nothing had been decided yet.

“I have different offers but I haven’t decided yet,” Guardiola said. “If I had signed a contract with a club then the club would communicate that. I have nothing signed yet so I can’t say anything about that.”

Guardiola acknowledged that the move was “a risk for me. The club gave me an exceptional squad. It would be possible to stay here and win more” but “I think it’s the right time for this new challenge. It’s only my second experience as coach. I need new challenges, new experiences. Three years is enough [at Bayern]. New players, new stadium, new restaurants, that’s what I want. That’s the reason, the only reason that I made that choice.”

Guardiola paid tribute to his players at Bayern and added, “Thomas Mueller said it perfectly: ‘Regardless of the coach, we want to win.’ I have no doubt that they will do the best for themselves, for the club, for this period of time (the rest of the season).”

The Champions League, which has so far eluded Guardiola at Bayern, remains his main priority for this season. AP