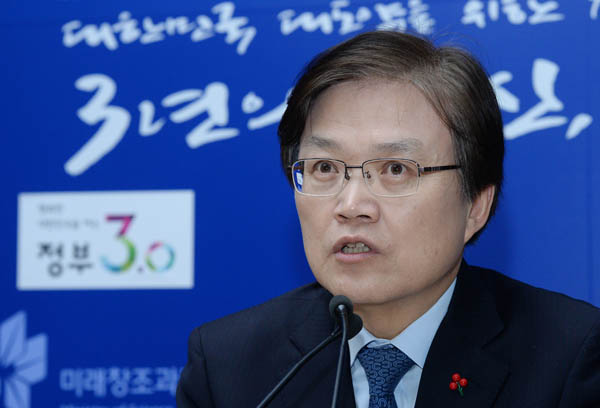 Choi Yang-hee, the minister of science, ICT and future planning, speaks at a press conference at the government complex in Gwacheon, Gyeonggi, on Wednesday. [NEWSIS]

His reaction in the form of an emergency conference is unusual, given that the ministry hours earlier sent a seven-page press release refuting in detail the news stories’ claims.

The articles from the Digital Times and Segye Ilbo are based on a report issued by the National Assembly Research Service on Dec. 31.

The two newspapers claimed that 62 percent of the total budget for the CCEIs comes from the government’s pocket, which was only made possible by a presidential decree. Since there is no legal basis for their funding, the centers’ budgets could be entirely scrapped should the next administration amend or eliminate the decree, forcing them to shut down, they wrote.

The news outlets also pointed out that each CCEI offers an average number of 0.7 basic-level counseling sessions every day and just 2.4 mentoring sessions, much fewer than many had expected the centers to offer.

But Minister Choi said in the conference that the legal ground for the CCEIs has already been arranged through the framework act on science and technology, which passed the National Assembly in November last year and will be implemented in June.

“The CCEIs have been taking root at a very fast speed,” he said, “They gave birth to over 500 start-ups, and we have seen a flurry of new investment funds for them.”

Regarding their underwhelming performance as start-up incubators, cited by the newspapers, Choi acknowledged that the government’s “excessive focus on numbers could hamper growth in terms of quality.” He cited a McKinsey report from last year, which said Korea’s start-up policies tend to focus too much on the number of companies being created.

The CCEIs, which total 18 nationwide, are the result of the incumbent government’s so-called creative economy initiative. They are part of partnerships between local governments and either conglomerates or large companies around the country, with the first created in Daegu through a deal with Samsung Electronics in September 2014. The initiative faced criticism from skeptics who claimed the centers were the result of the government twisting the arms of Korea’s top conglomerates, who had little interest in participating.

Rumors have been circulating about Choi running in the April general election, and he used the press conference as an opportunity to deny them.