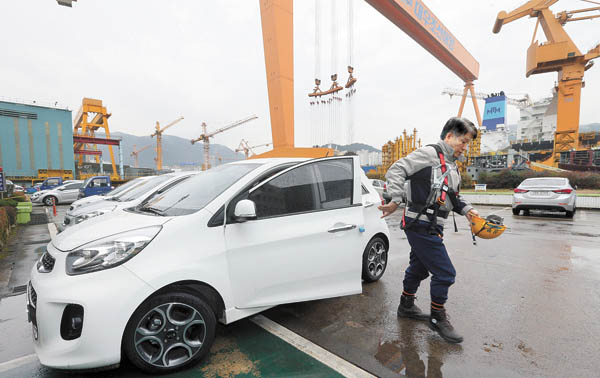 GEOJE, South Gyeongsang - The economy of the island of Geoje in South Gyeongsang has been stuck in a recession since last year, as the tidal wave of troubles affecting the global shipping industry overturned the fortunes of Korean big shipbuilders.

This is in stark contrast to the past when the island, whose economy is heavily dependent on shipbuilding yards, was one of the richest cities in the country, with average per capita income roughly at $40,000 while the rest of the country struggled to reach $30,000.

The city wasn’t affected much by the Asian crisis of the late 1990s, when major companies laid off employees or shut down businesses completely, or even the global financial meltdown of 2008.

But since the shipping industry headed into rough waters in 2011, the mood is much darker in Geoje, and past glories seem very much in the rear view window.

Lee Sang-gill, the 55-year-old head of production at Daewoo Shipbuilding & Marine Engineering’s (DSME) Okpo shipyard, hasn’t been home in the last four months. He has been sleeping on a small camping bed in his office.

“Many of the high-ranking officials and executives left the company after it suffered a loss of over 4 trillion won [$3.4 billion],” Lee said. “But for those who stayed, we have decided that we have to make our apologies and take responsibility. We decided not to leave our offices until the company’s management normalizes.”

Cutting perks is part of the apology process. This includes 60 executives - including the CEO - turning in their high-end luxury cars, such as Hyundai Motor’s 3,000 cc Genesis and 1,000 cc Grandeur, for Kia Motors’ compact Morning.

The attitudes of the 50,000 lower-ranking employees have changed, too.

The number of Okpo shipyard employees grew from 30,000 in 2012 to 50,000 last year, as DSME expanded from shipbuilding to the offshore plant business.

But the employees weren’t properly managed. Many came late to work or hung around the locker rooms when they should have been working. It was common to see employees forming long queues at restaurants long before lunch breaks.

“In the eight working hours, it turns out 40 percent of the time was spent on non-work-related duties,” Lee said.

In the past, employees weren’t afraid of getting laid off because if they were, there were plenty of other jobs in the city. Nobody feels that way these days. It has been made clear that if they don’t meet the changing working environment at DSME, they will be out the door.

Recently, one of 10 small and midsize shipbuilders closed up shop, and in the past three months, 28 out of some 160 companies on the island have been forced to shut down.

DSME workers have started economizing. Welding suits and protective gloves that were given to employees for free and quickly worn out are now shared among different shifts. Two months ago, the company held an event in which 20 disposable items, including welding suits and protective gloves, that were in good condition and could be recycled but were thrown away instead were put on display at the company’s cafeteria. The exhibit taught employees to recycle items that used to be quickly discarded.

The company also reduced the number of year-end or New Year’s parties to cut costs.

“Last year during a normalization debate, all the employees and executives signed a pledge to save the company,” said 50-year old Lee Pal-soon, who runs one of the production teams. “Since then, we have been playing our part, including buying the company’s shares from 35 billion won we were able to collect from the bonuses of 10,000 employees.”

DSME CEO Jung Sung-leep said he asked his employees, including executives, to read the novel “The Martian,” which was turned into a movie starring Matt Damon.

“I was very moved after reading how the protagonist, who was stranded on Mars, safely returned [to Earth] after fighting for his very survival while keeping up hope,” Jung said. “If, like the protagonist, we don’t lose hope, we will be able to reach our management normalization target by the end of next year, which would be faster than the 2019 expectation of our main creditor Korea Development Bank, which owns a 31.46 percent stake in the company.”

Because major shipbuilders like DSME are cutting back on costs, both the traditional markets and major discount stores on the island have seen their sales plunge between 20 to 25 percent in a year. Geoje is searching for new businesses to make up for the losses, one of which is tourism.

The Geoje city government started a marine tourism theme park on a 112,580-square-meter (28-acre) plot near the Geoje bridge, which connects the island to Busan, after successfully attracting 193.6 billion won in investment from Hanwha Hotels & Resorts.

Additionally, the Geoje government plans to develop Jisim Island, which it will take ownership of from the Ministry of National Defense in June. It also plans to finish building a cable car connecting peaks on Geoje Island between 2017 and 2018.

“We plan to keep our reputation as a ‘rich city’ by overcoming the recession and creating a new growth engine, which is tourism,” Geoje Mayor Kwon Min-ho said.