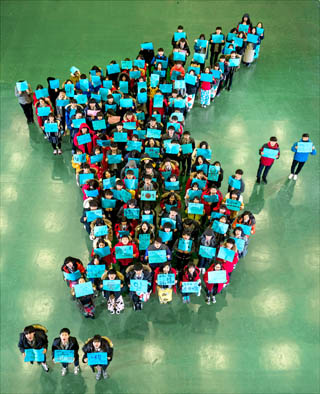 One hundred and sixty students at Hangyeore High School, a school for North Korean defectors in Anseong, Gyeonggi, gather together on Dec. 28 to form a human map of the Korean Peninsula. The students held light blue papers on which they wrote their wishes for when unification is realized. [PARK JONG GEUN]

Under Korea’s intense exam-oriented education system, the topic of the unification of the Korean Peninsula is nothing but a fractional part of the curriculum.

A survey published in late December by the Ministry of Unification and Ministry of Education shows that nearly 80 percent of the lessons taught about inter-Korean unification accounted for less than five hours last year.

The two ministries conducted the nationwide survey between early October and mid-November, questioning 119,551 students and 4,672 teachers in 704 schools and visiting classes. 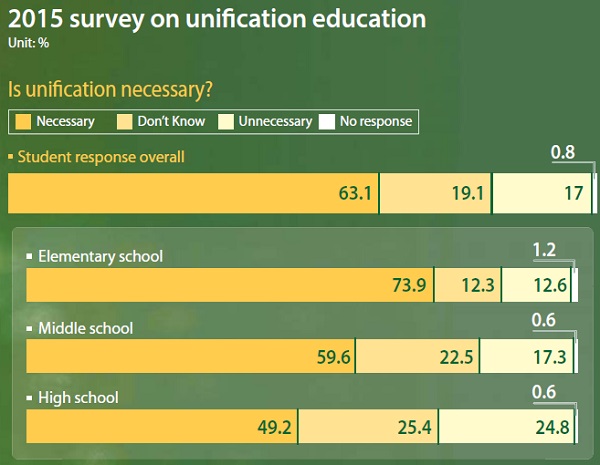 Although the percentage of students who believe unification is necessary increased almost 10 percent, from 53.3 percent in 2014 to 63.1 percent last year, one-fifth of Korean students said they still have never learned about the unification of the Korean Peninsula.

“Because unification education is not directly related to the college entrance examination, the subject in textbooks is not dealt with properly,” Shin Jae-pyo, an official at the Institute for Unification Education, said.

“It’s not easy to set time to talk about unification in classes since the college entrance exam only has one to two questions about it,” a high school social studies teacher said.

Another middle school teacher added that the unit on unification in history studies was generally dismissed.

The government survey showed that 71 percent of teachers haven’t received any training on how to teach the subject of unification, implying that the government’s vow to expand knowledge of the subject in school has not yet been reached.

In May 2014, the Ministry of Unification and Ministry of Education signed a memorandum of understanding seeking to substantialize education regarding the peaceful unification of the Korean Peninsula in every class, especially considering that it is easily neglected. 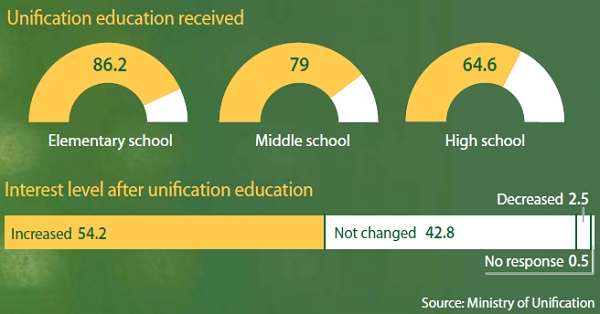 However, discord between the Education Ministry and local education offices on the plan has caused a delay on an agreement to implement effective unification education methods in each school.

A government official who has direct knowledge of the matter blamed the political inclinations of local superintendents, which the source said made it difficult for the government and education offices to cooperate.

A government official close with local education offices said that the superintendents’ “distrust” of the current government made it difficult to decide on specific content for unification education.