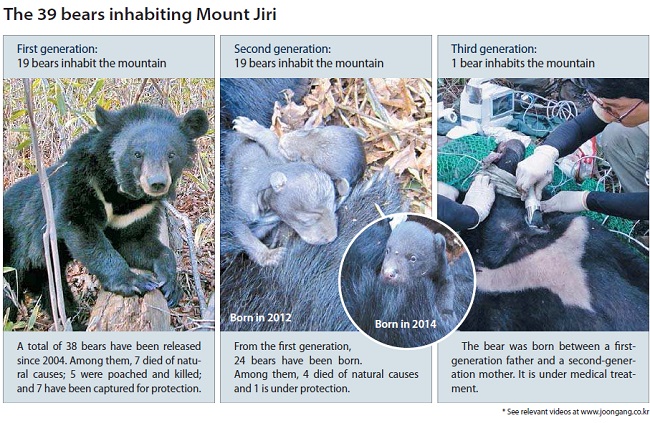 Authorities have discovered a young bear cub on Mount Jiri that is the first known third-generation Asiatic black bear of its kind in the country, the Korea National Park Service and the Ministry of Environment announced this week.

The cub, also known as a half-moon bear, was found in September, caught in a trap set by the park service on Mount Jiri (6,283 feet), the second-highest mountain in Korea after Jeju Island’s Mount Halla (6,398 feet).

The discovery of the cub means that there are now 39 known and documented Asiatic black bears living in the area that are forming new generations in the wild.

An examination found that there was no tag number on either the bear’s ear or foot, nor did he have an attached signal transmitter device to track his whereabouts. A blood sample was taken and he was sent back to the wild.

“By analyzing the cub’s genes, we found that the genes of the mother bear were a different set compared to the ones recorded in our database,” the Ministry of Environment and the Korea National Park Service said in a statement on Sunday. “The mother bear might be part of the second generation of released bears, which heightens the possibility that the 39th bear [cub] could be their grandchild.”

The park service compared the cub’s genes with those of others collected in its database, created in 2014. The database contains 52 bears that once lived on Mount Jiri or are still living today.

According to the analysis, the father bear was determined to be an Asiatic black bear from Russia taken in by the park service and released on Mount Jiri in 2005. However, the genes of the mother bear did not match any in the database, which means she was not one of the bears released by the park service.

“[We have found that] nine bears, including the mother bear, that were born in the wild are not in the database,” said Kim Seok-beom, the manager of the Species Restoration Technology Institute of Korea National Park Service.

“It’s getting difficult to catch the Asiatic black bears since the number of the species is increasing and they are getting wilder. The institute is trying to take samples from the fur and feces found, but it takes time to evaluate.”

After the number of Asiatic black bears in the country started to decline due to poaching, they were listed as an endangered species and recognized as Natural Monument No. 329.

Since 2004, the park service has brought in Asiatic black bears from China and Russia and released them on Mount Jiri.

When the newly discovered bear cub is about 4 or 5 years old, it will likely begin breeding, environmentalists say, with the fourth generation projected to be born around 2018.

The park service plans to test-release Asiatic black bears on Mount Seorak and Odaesan National Park in Gangwon next year.