‘Normalizing’ is bound to hurt

‘Normalizing’ is bound to hurt 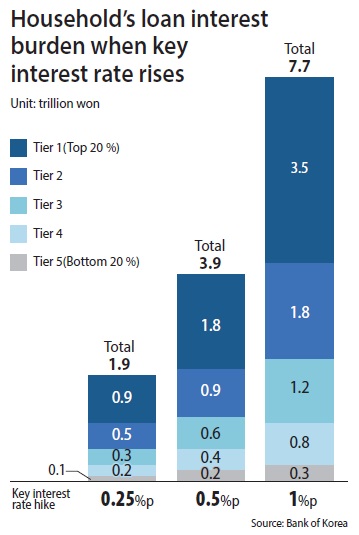 How bad will it hurt if Korea’s own central bank starts normalizing its own loose monetary policy?

A study by the Bank of Korea submitted to lawmaker Park Won-suk of the liberal Justice Party showed that if the Korean central bank raises the key interest rate by 0.25 percentage points, the cumulative cost of servicing the national household debt will rise an additional 1.9 trillion won ($1.58 billion).

Among five different income groups, the top 20 percent by income are expected to shoulder the biggest amount in interest payments on loans when the interest rate is raised.

The government has said it’s not too worried about the impact that interest rate hikes might have on financial markets since most of the loans have been borrowed by people who can afford the hikes because they have relatively higher incomes.

In fact, Finance Minister nominee Yoo Il-ho in answers delivered to lawmakers before a National Assembly hearing on his nomination said since the top 40 percent by income holds 70 percent of the nation’s household loans, and since financial assets are more than two times larger than financial debts, households’ abilities to repay debt are in a relatively good shape.

But Bank of Korea Governor Lee Ju-yeol is more cautious on the issue. On Tuesday he stressed the strong need to come up with plans that could “soft land” the household debt problem.

“Household debt has grown a lot and it could act as an obstacle that could limit the nation’s growth,” the central bank governor said.

As of the third quarter of 2015, Korean household debt along with purchases made via credit cards and loans amounted to an all-time record of 1,166 trillion won.