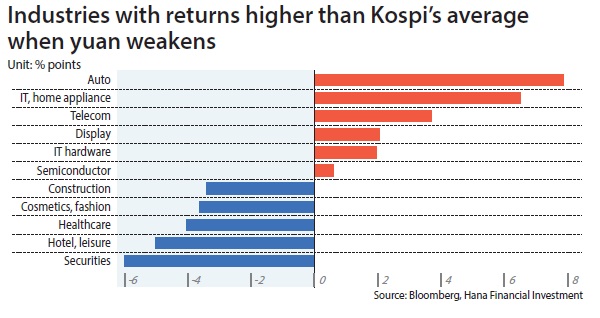 The Chinese yuan, which has depreciated since the latter half of 2015, is showing few signs of strengthening.

This can be either good or bad news for Korean companies, depending on the industry.

The weakening yuan has helped rally the stock prices of Korea’s export-focused industries like automobiles, IT, home appliances, communications services, displays and semiconductors, but it has also made foreign investors prefer more stable assets in advanced markets, which isn’t good for the Korean market as a whole.

“Since 2012, when the Chinese economy first showed some signs of a slowdown, the trend of the yuan’s depreciation often matched with the trend of foreign investors showing preference for stable assets in advanced markets,” said Chang Hee-jong, a senior analyst at Hana Financial Investment. “When such a trend appears, Korea also saw its benchmark Kospi index decline.”

Still, certain industries are doing better than average on the market.

In a recent report, Hana Financial Investment compared the average investment returns for each industry with the Kospi’s average in August, November and December of last year - months in which the yuan significantly weakened.

Automobile, IT and home appliance shares recorded an average return 6 to 8 percentage points higher than the Kospi’s average. Telecommunications and utilities shares also outperformed the index by 2 to 4 percentage points.

“The exchange rate fluctuations that follow the devaluation by the People’s Bank of China are closely related to the strengthening of the U.S. dollar. It brings a different outcome in each industry,” said Park Jung-woo, an analyst at Korea Investment & Securities. “The weakening of the yuan is highly likely to bring down the value of the won, bringing up the value of export-based stocks like automobiles. The cheap won gives price competitiveness in export products.”

When the yuan was weak in the latter half of last year, the Korean won followed to stay weak, but the Japanese yen often remained strong, Chang from Hana Financial said.

“Under such circumstances, automobile and IT industries gained price competitiveness and therefore, their stocks gained as well,” he explained, adding that telecom and utility service stocks also stayed strong because they are less influenced by external factors.

But cosmetics, hotel, leisure and health care stocks showed average returns about 2 to 6 percentage points lower than the Kospi’s average.

A weak yuan means that Korean products exported to China become more expensive, and Chinese tourists are more likely to refrain from traveling overseas. Those consumer products and service industries heavily dependent on China get hurt as a result.

Will the Chinese currency keep depreciating? Analysts have mixed opinions.

Some argue the depreciation will remain for the foreseeable future, as China hopes to lift its sagging growth by exporting more with a cheap yuan.

“The yuan showed the second-largest drop in value among currencies in the past three years,” Chang said. “The depreciation could go on for a while, so Korean investors should invest in sectors [domestic shares like telecom or food and beverage] that keep the index up.”

Others say the depreciation may be brief.

“China’s December foreign reserve, which is scheduled to be announced soon, is expected to shrink by about $23.3 billion compared to the previous month, showing a larger decline than in November,” said Cho Byung-hyun, an analyst from Yuanta Securities. “If such dollar volume status is reflected, the renminbi’s depreciation will slow down.”

Meanwhile, the Chinese government announced it aims to move to a freely floating exchange rate system, after the International Monetary Fund included the renminbi in the special drawing rights, an elite international currency basket.

The yuan’s upgraded position in the international monetary market means that the Chinese government won’t be able to intervene in the market as easily as it has so far.