Calls grow for nuclear weapons in the South

Calls grow for nuclear weapons in the South 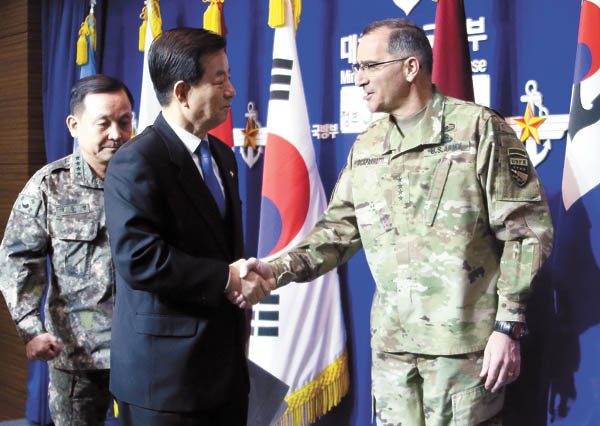 The United States promised South Korea on Thursday that it would take all measures necessary - both diplomatic and military - to counter the North’s latest nuclear threat, as demands for nuclear arms in the South grew.

President Park Geun-hye and U.S. President Barack Obama spoke on Thursday by phone to discuss their response to the North’s claim that it successfully tested a hydrogen bomb on Wednesday, the presidential offices of the two countries said. Defense and foreign affairs chiefs from Seoul and Washington also held telephone consultations, and each issued warning statements to Pyongyang.

“Since the international community, including South Korea and the United States, has repeatedly warned the North that its nuclear test will never be tolerated and it will pay a consequence, the two leaders agreed that the North will be held accountable for the latest nuclear test,” the Blue House said in a press release. “The two leaders agreed that they will closely work together for the United Nations Security Council to swiftly adopt a stern resolution.

“Obama especially stressed the need to push forward the strongest, comprehensive sanctions, and promised close cooperation with Seoul to this end.”

The Blue House said Obama telephoned Park, and the two leaders talked for about 20 minutes.

The White House also issued a statement confirming the discussion.

“President Obama reaffirmed the unshakeable U.S. commitment to the security of the [South], and the two leaders agreed to work together to forge a united and strong international response to North Korea’s latest reckless behavior,” the White House said.

The U.S. assurance to defend its ally from escalating North Korean threats came as conservatives in the South started demanding that the country arm itself with nuclear weapons. At a Supreme Council meeting of the ruling Saenuri Party, several leaders publicly stressed the need for defensive nuclear armaments.

“The time has come for the South to have a peaceful nuclear program for the sake of self-defense to counter the North’s fearful, destructive nuclear weapons,” said Rep. Won Yoo-chul, floor leader of the Saenuri Party. “The North is aiming at our head with nuclear weapons, and it is frustrating for us to just respond with sanctions.”

Won, a former chairman of the National Assembly’s Defense Committee, had previously commented that the South should become a nuclear state, but this was the first time he voiced the opinion as the ruling party’s floor leader.

Rep. Kim Jung-hoon, the party’s chief policy maker, also said the government must seriously explore the implications of the South being the only country without nuclear weapons capability in the region.

“China, Russia and the North are de facto nuclear states, and Japan is allowed to do nuclear reprocessing and uranium enrichment, so it can arm itself with nuclear weapons any time it wants to,” he said. “We must find a way to guarantee our security.”

“We need to develop nuclear arms to defend ourselves,” said Rep. Kim Eul-dong, a member of the Supreme Council. “This is a matter of life or death.”

“If the international community won’t allow us to do so, the United States must offer tangible resolutions for nuclear security, such as deploying tactical nuclear weapons in the South,” she added.

The United States first deployed nuclear-armed Honest John missiles and 280-millimeter atomic cannons to the South in 1958. Since then, more tactical nuclear weapons, including nuclear warheads and suitcase nuclear devices, were brought in as deterrence against the North.

The U.S. Forces Korea, however, removed all its tactical nuclear weapons as the two Koreas adopted the Joint Declaration on the Denuclearization of the Korean Peninsula in 1992. Since then, Seoul and Washington maintain the position that the South has remained nuclear arms-free, while the United States pledges a nuclear umbrella for its ally.

The main liberal opposition Minjoo Party expressed concerns about the demands of the ruling party leadership.

“It can be a way to deter the North, but in terms of a nuclear-free Korean Peninsula, that is…” he said without completing the response.

Earlier in the day, the militaries of South Korea and the United States discussed their responses to the North’s latest brinkmanship. They discussed plans to deploy American strategic weapons to the Korean Peninsula, a senior Defense Ministry official told the JoongAng Ilbo on Thursday.

“Gen. Lee Soon-jin, chairman of the Joint Chiefs of Staff, and Gen. Curtis Scaparrotti, commander of the U.S. Forces Korea, talked by phone immediately after the North’s nuclear test, and they met later Wednesday afternoon,” he said. “They discussed bringing in U.S. strategic assets to the Korean Peninsula.”

Military sources said F-22 stealth fighter jets, B-2 bombers and B-52 bombers capable of carrying atomic weapons can be deployed, as well as an aircraft carrier. The deployments may require consultation with China because Beijing has reacted sensitively to American deployment of strategic assets to the peninsula.

Defense Minister Han is planning to talk to his Chinese counterpart Chang Wanquan, the source said.

“Carter and Han agreed that North Korea’s provocations should have consequences,” a statement from the Pentagon said.

A press statement by the Ministry of National Defense also said Han and Carter agreed that the Korea-U.S. alliance is playing a pivotal role in deterring the North’s provocations and defending the South. They agreed to push forward a scheduled joint military exercise, create a specific deterrence strategy and devise a joint military plan known as the “4D operation plan.”

Named for “detect, disrupt, destroy and defense,” the plan is intended to preemptively take out the North’s missile and nuclear threats. It is a similar concept to South Korea’s “Kill Chain,” an integrated information, surveillance and pre-emptive strike system designed to precisely eliminate North Korean threats before they are launched.

Han also told Carter during their talks that the Kill Chain and the Korean Air and Missile Defense system will be the ministry’s top priority.

Security experts said the United States must deploy an advanced missile defense system to the South as a means of deterrence against the North’s nuclear capabilities.

“As Pyongyang is claiming that it succeeded in testing a hydrogen bomb, we are in greater need of Thaad deployment,” Prof. Park Hwee-rhak, dean of the Graduate School of Politics and Leadership at Kookmin University, told the JoongAng Ilbo. “As a reliable system that can directly hurt the North, we need the deployment.”

The Terminal High Altitude Area Defense (Thaad) system is a U.S.-led antiballistic missile defense shield. The deployment of a Thaad battery to the South has been a sensitive issue because China and Russia oppose it, claiming that its radar system can be used as a method of surveillance against them.

“Now is the best time to persuade China,” Park said. “We must not lose this momentum.”

Another expert, Prof. Park Ihn-hwi of Ewha Womans University, said the issue can be raised as the Korean public is concerned about national security.