Loudspeakers on the border to go back on at noon

Loudspeakers on the border to go back on at noon 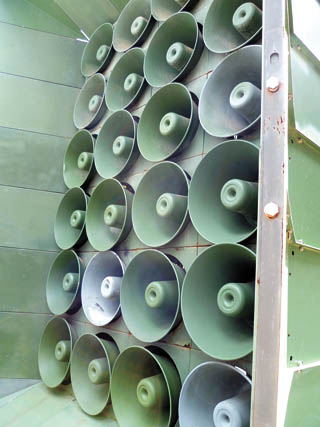 A file photo of loudspeakers that used to be installed along the DMZ. [NEWSIS]

The Blue House said it will resume propaganda broadcasts at the border starting from noon today as a punitive measure following North Korea’s fourth nuclear test on Wednesday, a decision that could send tensions on the peninsula soaring.

Cho Tae-yong, deputy director of the National Security Office, made an announcement at the Blue House on Thursday that the South would turn on speakers installed at borderline units starting this afternoon, putting an end to four months of silence following a joint agreement struck in August.

Mindful of the North’s threat last year to shoot at the speakers, Cho said the military would sternly respond if the North Korean military provokes them.

President Park Geun-hye’s decision to turn the speakers back on came a day after what Pyongyang claimed to have been a hydrogen bomb test. Whether the device was a hydrogen bomb is disputed, but it was the fourth nuclear test by the North Korean regime.

Seoul silenced the speakers to follow through on a six-point agreement reached on Aug. 25, 2015, following 43 hours of talks in which the South consented to pulling the plug from the speakers as long as there would be “no unusual activity” from the North. Seoul’s decision to turn the speakers back on indicates the Park government saw the Wednesday nuclear test as a clear violation of the agreement.

While the North did not issue a response to Seoul’s decision as of press time, it is expected to balk. After South Korea resumed its loudspeaker campaign in retaliation for land mine explosions that maimed two South Korean soldiers on Aug. 4, the North fired artillery shells across the border, declared a quasi-state of war and gave Seoul a 48-hour ultimatum to pull the plug.

The two sides avoided a direct military confrontation along the heavily fortified border thanks to the joint agreement. Now tensions are bound to rise.

“Resuming the broadcasts will pose a threat to the North, but also pose a security threat to the South since the North will certainly promise retaliation,” said Lim Eul-chul, a professor of North Korean studies at Kyungnam University. “The North’s threat of surgical strike on the speakers could revive the quasi-state-of-war mode of last year.”

The North deeply dislikes the broadcasts from the border, which experts say exposes North Korean soldiers and citizens living near the border to information about the outside world.