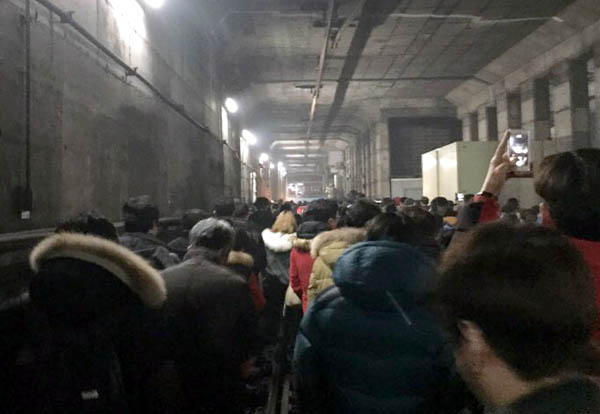 Passengers walk down the train tracks in the tunnel between Sungshin Women’s University and Hansung University Station after a train on subway line No. 4, operated by Seoul Metro, suddenly stopped running on Wednesday evening. [NEWSIS]

Approximately 800 passengers were left to fend for themselves in a dark tunnel between two subway stations in northern Seoul after their train came to an abrupt stop, injuring 19 people and delaying subway operations for more than an hour during evening rush hour on Wednesday.

The Seoul Metro announced Thursday that the 22-year-old train had abruptly stopped when the power went out after a circuit breaker malfunctioned.

After the train was introduced in March 1994, the high-speed circuit breaker, which monitors and regulates electric current, was replaced just once in 1997.

The Seoul Metro claimed that it had conducted an overall inspection of the train a year ago and had checked the circuit breaker on Tuesday but did not detect any problems.

In response to the incident, it plans to replace 320 older circuit breakers in 32 trains by June and expand its investigation in an effort to prevent similar accidents.

According to witnesses, the train sounded as if it had crashed, then came to a halt as most of its lights went out.

Most passengers started making phone calls, one person onboard said, with some calling Seoul Metro and 119 rescue centers.

After about 10 minutes, a fire broke out outside the train, and the smell of smoke sent passengers into a panic as they struggled to flee out the left- and right-side doors. Despite the chaos, no announcement was made.

Hundreds of passengers escaped the train by helping one another out and walking down the tracks to the nearest platform between both stations; there was no security guidance from Seoul Metro.

According to the operator, 19 passengers were injured and transported to nearby hospitals, though 15 of them were sent home shortly thereafter.

“I ran for about 15 minutes toward Sungshin Women’s University Station. Most people were rushing, and some tripped,” said one passenger, surnamed Lee, 26, who was at the scene.

A 62-year-old passenger, surnamed Kim, reportedly broke his left ankle while jumping out of the train, while another rider, a 64-year-old surnamed Lee, tumbled down onto the tracks and sustained three loose teeth from the fall.

The last major incident on the Seoul Metro system occurred in May 2014, when about 200 people were injured after one train crashed into another.