Apartment and jeonse prices predicted to increase this year

Apartment and jeonse prices predicted to increase this year 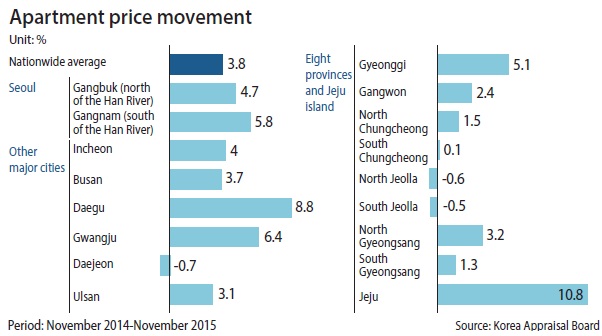 Late last year when former Land Minister Yoo Il-ho was nominated as the new finance minister, the property market was stirred up over whether apartment prices would fall due to oversupply.

A study by the Korea Appraisal Board released Friday claimed that there will be no sudden drop in property values this year. In fact, housing prices will likely see a slight increase.

According to a report by the real estate research center under the Korea Appraisal Board, local housing prices will likely grow between 1.2 percent and 2 percent, while the long-term deposit rent, or jeonse, will go up between 2 percent and 2.8 percent.

However, the growth in housing prices will likely be limited by the ongoing economic uncertainties both home and abroad.

More specifically, the report said the negative factors limiting housing prices are concerns on oversupply, increasing household debt and the burden caused by the short-term jump in the property market last year.

But even under such circumstances, the market entry of the so-called eco-generation, consisting of people born between 1979 and 1992, will have a positive effect on the market.

Additionally, rising jeonse prices as well as low borrowing rates will cause many people paying jeonse to consider switching over to purchasing a home of their own, which would help raise housing prices.

“There are still a lot of uncertainties existing in the housing market this year, but it is likely that both the transaction market as well as the jeonse market will see mild increases due to the recovery of the domestic economy supported by economic revitalization policies,” said Chae Mi-ok, head of the real estate research institute at Korea Appraisal Board, in the report.