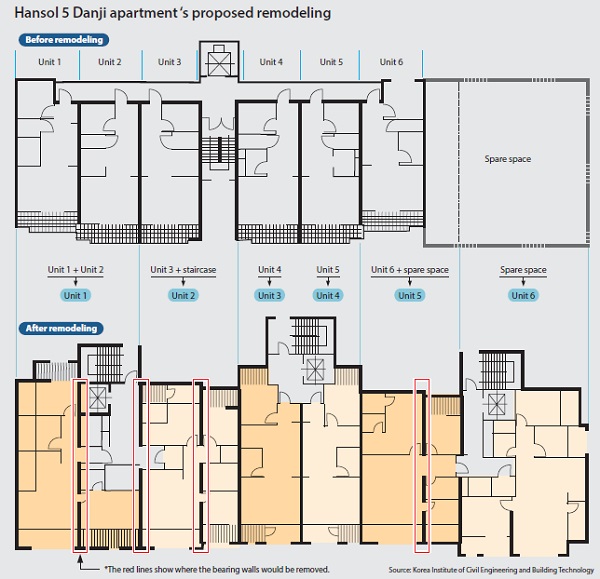 When the Daechi 2 Danji apartment in Gaepo-dong, Gangnam District, southern Seoul, was built in 1992, it featured features floors with several units in a line with their front doors connected to a long corridor, unlike apartments of today.

The residents and stakeholders of the apartment were excited in 2013 when the national housing act was revised to allow it to be remodeled to add three floors to increase the building from 15 to 18 stories.

The additional floors would mean more buyers, and that would lead to less of a burden from construction costs to existing homeowners. Remodeling is considered a less costly way to refurbish an old apartment than reconstruction, where the building is knocked down and rebuilt.

But the remodeling never happened because the government was extremely restrictive on the removal of the bearing walls that hold up the floors of the building by transferring its weight to the foundation structure.

Bearing walls are thick walls inside apartment buildings often used to separate units and are thick enough to support the buildings’ weight.

Due to the strict regulations, the homeowners and residents were only able to convert their balconies and remove the dividers to make them extensions of the living rooms.

Recently, the owners of the apartments are once again in high hopes as the Ministry of Land, Infrastructure and Transport decided to ease regulations regarding bearing walls.

Previously, the residents of the apartment were only allowed to either expand the balcony or the back room in remodeling their apartments. But once the Land Ministry’s regulation on bearing walls eases, they will be able to remove the bearing walls separating two apartment units to create a larger-size apartment.

“The market price per unit grew from 420 million won [$349,000] when the new housing act was introduced to 500 million won,” said Chung Hak-soo, the head of the remodeling union of Daechi 2 Danji apartment complex. “If the new remodeling goes into effect, it will go up another 20 million to 30 million won.”

The Land Ministry on Dec. 28 announced it was devising a plan to allow bearing walls to be removed so that apartment complexes can be remodeled to create larger units.

The government plans to revise the regulation by end of March.

Once the regulation is eased, small apartment units that are between 60 square meters (646 square feet) and 85 square meters will be able to expand on either side, allowing them to be turned into apartments with three to four rooms including a living room, which is more popular today.

“Once the removal of bearing walls is allowed, apartments will be able to connect two units that will increase the number of rooms from one to two, or two to three rooms,” said Kim Ee-tak, chief of housing construction at the Land Ministry.

The removal of bearing walls was actually pushed by apartment complexes that received government approval for vertical expansion in 2013, including Daechi 2 Danji as well as Hansol 5 Danji apartment in Seongnam, Gyeonggi, and Mokryun 3 Danji apartment in Anyang, Gyeonggi. These apartments were allowed to add additional floors: two additional floors for apartments that were less than 14 stories high and three for those that are 15 stories or higher.

Most these apartments have small-sized units that are between 60 and 85 square meters with a long corridor in front of the units that are all in a line.

When these apartments were working on remodeling designs, it became clear that unless they removed the bearing wall between each unit and expand the apartment sideways, the remodeling would not help raise the value of the building because there would be low demand for apartments with only one or two rooms.

“Using the spare space, we could secure the number of apartments even if we expand sideways by removing the bearing walls,” said Song Chang-gyu, who represents the remodeling union for Mokryun 3 Danji.

The problem is removing the bearing wall, which is actually the most essential structure holding up the weight of the building.

The government is mulling over the possibility of lowering the minimum requirement for the shear wall resistance force ratio from 1 to 0.8. The ratio determines how much force the wall could withstand from the weight of the building or other forces like an earthquake. The higher the ratio is, the higher the resistance.

Lowering the indicator might not only cause safety issues, but it also raise the cost of remodeling due to having to install extra support to hold the necessary weight.

Another question is the ratio of bearing wall that can be removed.

In a research in which a bearing wall at Hansol 5 Danji apartment was virtually removed, it turned out safety wouldn’t be compromised if the bearing wall separating two adjacent apartment units was reduced to the thickness at which a door could be installed.

The housing construction industry has welcomed the recent move by the government.

“As much as the expansion of the remodeling market is important, the related laws need to change to keep up,” said an official at a major construction firm, who requested anonymity. “Although it is late, such changes are welcomed.”