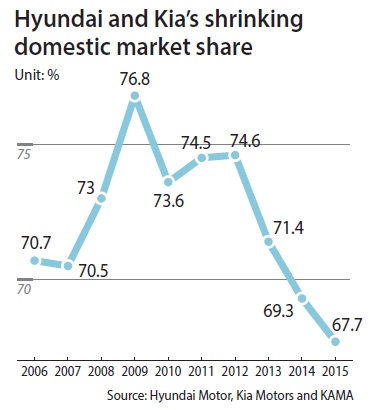 Hyundai Motor and Kia Motors’ combined share of the domestic market sunk to an all-time low of 67.7 percent last year, mainly due to the increasing popularity of imported cars.

The market share of Hyundai Motor alone also fell to a record-low, dipping below the 40 percent mark for the first time since data was compiled by the industry.

The number of cars sold by Hyundai and Kia last year actually grew by 7.9 percent year-on-year, to 1,241,621. But that still wasn’t enough to catch up with the surging demand for imported cars, the sales of which soared 24.2 percent year-on-year to 243,900.

“There were worries over Volkswagen’s emissions rigging scandal, but since many foreign automakers carried out a series of discount promotions, they continued to ride high in terms of sales,” said Yoon Dae-sung, an executive of Kaida.

Although the nation’s auto market expanded to its largest size last year thanks to a temporary lowering of the individual consumption tax and the release of new models, the numbers show that the growth was mostly led by overseas brands.

Earlier this month, Hyundai Motor Group Chairman Chung Mong-koo remarked that it is more important to develop leading auto technology and strengthen competitiveness than to focus solely on sales in such an unstable economic situation.

“The threat of imported cars is expected to grow even bigger this year, but we aim to secure our presence in the domestic market through various new models and our newly established luxury brand, Genesis,” a spokesman from Hyundai said.

Hyundai Motor’s ecofriendly Ioniq and Kia Motors’ new K7 are on their way to the market this month. The recently released EQ900 under Hyundai’s Genesis brand will also face off with imported cars in the luxury car segment.