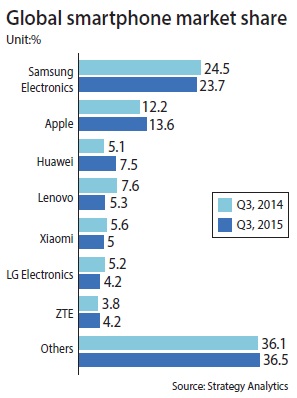 In an earnings guidance on Friday, the tech giant predicted it made around 6.1 trillion won ($5.08 billion) in operating profit between October and December, up 15.3 percent from the same period last year but down 17.5 percent from the previous quarter. The figure is below a market expectation of 6.57 trillion won compiled by market tracker FnGuide.

The company projected revenue of 53 trillion won for the period, up 0.5 percent year-on-year.

“Samsung’s key business sectors including displays, smartphones and semiconductors all appear to have seen less-than expected sales in the fourth quarter,” said Greg Roh, a researcher at HMC Investment Securities.

“The downbeat performance in displays and semiconductors was caused by a steep decline in panel and chip prices, which is the result of sliding demand for smartphones in major economies,” the researcher said.

Samsung’s performance in the smartphone business has declined as competition from Apple in the top end and price-competitive Chinese manufacturers in the lower tier cuts into its market share.

Smartphone sales by Samsung Electronics took up 23.7 percent of the global market in the third quarter last year, according to Strategy Analytics, 0.8 percent down from the same period last year.

On the other hand, rival Apple grabbed an improved market share of 13.6 percent in the same period compared to 12.2 percent in 2014’s third quarter.

On top of the tough competition, overall demand for smartphones is losing steam as the smartphone market has become saturated. Market research firm IDC said that entering 2015, smartphone shipments to China slowed due to the saturated market conditions and slowing economic growth, though the country received almost a third of all new smartphone shipments in 2014.

Such a difficult market squeezes the other leading players like Apple as well.

The U.S. manufacturer reportedly decided to cut its output of iPhone 6s and 6s Plus by about 30 percent from January to March.

In the chip business, an overall decline in demand for smartphones and PCs weighed in. Slowing demand accelerated a slide in prices of DRAM and NAND, which could impact the growth of Samsung’s semiconductor business, according to Kim Roko, an analyst at Hana Financial Investment. “Revenue from the chip business will be less than expected, affected by the slowing demand for smartphones and PCs,” the researcher said in a report.

Of all the negative factors, a fall in LCD screen prices was cited as the major culprit eating into Samsung’s earnings.

“Due to the falling prices, the LCD business would likely suffer losses in this quarter,” Roh of HMC said.

But the fourth quarter was not all grim.

“It seems that television sales improved in the holiday season,” Kim said, “And consumer electronics also contributed to boosting revenue as the premium products were well-received.”

Samsung Electronics didn’t break down the estimate by business sectors, but Roh forecast that its mobile and IT businesses brought in 2 trillion won in profit and the semiconductor division 3 trillion won.

Based on the guidance, Samsung’s operating profit throughout the year is recorded at 26.37 trillion won, up 5.4 percent from the previous year.

Annual sales came in at 200.34 trillion won, securing the over 200 trillion won sales mark for the fourth consecutive year.