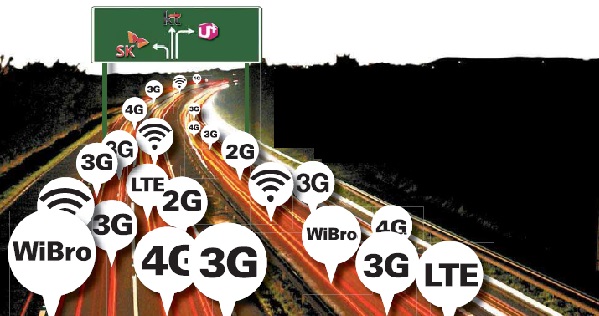 According to the Ministry of Science, ICT and Future Planning, an average 179,929 terabytes of data was transmitted per day in November last year, an increase of 115.5 percent compared to 22 months earlier, in January 2014.

Data transmitted while using KakaoTalk, playing mobile games and downloading movies or songs all add to the massive traffic, and some overseas media outlets have referred to Koreans as “data gluttons” in response to the surprisingly large figure.

In order to keep up with the demand for data, the ICT Ministry has announced it will auction off additional bandwidth to the nation’s mobile carriers in April, with specifics about the sale to be released next month.

Industry insiders are already watching closely, saying the acquisition of additional bandwidth could determine the fate of local carriers.

Bandwidth is directly related to the competitiveness of each carrier, which is why carriers are willing to shell out hundreds of billions of won to obtain more.

Just as roads can’t be built without land, mobile carriers need to borrow bandwidth from the government to facilitate data traffic.

Drivers prefer eight-lane highways to ones with four lanes because there’s usually less congestion, and the same is true for customers and bandwidth; customers prefer carriers that offer broader bandwidths because that translates into faster data speeds for them.

Since mobile users are prone to jump ship to the carrier with the fastest data speeds, industry ranking could change quickly if a carrier suddenly acquires more bandwidth.

Even if the bandwidth is not for its immediate use, companies fight hard for any available because their future competitiveness depends on its acquisition.

Carriers are known to make massive bids to block their competitors from getting more bandwidth. In 2011, top carrier SK Telecom (SKT) and second-place KT faced off over 20 MHz of bandwidth on the 1.8 GHz frequency range.

Among spectrums to be up for bid this year, the most eyes are on 20 MHz of bandwidth on the 2.1 GHz range, which SKT is returning to the government. Industry insiders forecast its price may soar to over a trillion won. SKT has a strong incentive to secure it again because the company has already invested roughly 850 billion won in network facilities for the particular range, but KT and LG U+ are both keen to keep their competitor from benefitting.

In bidding wars like this, it’s as important to pass on the highest-possible price to a competitor as it is to actually win the bid at the lowest price.

As a result, some are forecasting that KT and LG U+ will drive up the bidding to as high as a trillion won, then suddenly drop out and burden SKT with a steep bill.

The fierceness of these bidding wars comes from the fact that bandwidth is a limited resource. Since frequencies are just the number of vibrations in a radio wave, it seems like there should be a sufficiently large number to use. The reality is much more complicated, and the challenges are myriad. For one, the use of a frequency requires intense cooperation and coordination from facility operators, manufacturers and telecommunication service providers.

The frequencies allocated for domestic telecommunications used to be enough, but with increasing use of frequencies for different kinds satellites and military purposes, frequency is becoming a scarce resource.

The relationship between data and frequency can be thought of like a car (the data) running on a highway (the frequency). Each mobile carrier provides its telecommunication services through different frequency ranges, with each company in charge of a different “highway.” Certain types of cars, whose frequency ranges match a particular highway, are allowed to use the road.

For example, KT offers its 4G LTE network service through the 1.8 GHz frequency range. When a KT user makes a call or sends a KakaoTalk message, that data contains 1.8 billion vibration cycles per second. KT’s base station recognizes that data - the car - as coming from a KT user based on those vibrations, and allows the car to use its 1.8 GHz highway. LG U+ provides LTE service on 2.6 GHz frequency range, which means the company only processes data at 2.6 billion vibrations per second.

But if each company has its own set of highways, how can the users of different mobile carriers connect with each other?

Just as there are interchanges in traffic, so too are there links between carriers’ different “highways.”

If a KT subscriber calls or sends a message to a friend who uses LG U+, that data first flows through the 1.8 GHz highway then enters the 2.6 GHz highway through an interchange.

Just as drivers need to pay tolls to use certain highways, each mobile carrier has to pay fees to other carriers if their subscribers used another’s frequency range.

The nation’s three major players calculate how long and how many times their subscribers use a competitor’s highway and charge each other accordingly. This is why each carrier offers discounts for calls between subscribers of the same carrier.

SKT, with the largest number of subscribers, receive relatively more money from KT and LG U+.

Carriers sometimes share frequency ranges. SKT, for example, provides its LTE service in part through the 1.8 GHz frequency range along with KT. In cases like this, each carrier further narrows the range to create their own individual highway.

Usually frequencies over 1 GHz are considered “high-frequencies” and those at the MHz level are called “low-frequencies.”

Higher frequencies provides higher quality data transmission, but also cannot transmit data very far. As a result, carriers operating at these frequencies must increase the number and spread of base stations across a given area to make up for the lack of range.

Lower frequencies offer lower-quality data transmission, but can transmit that data very far as a result. Carriers operating at these lower frequencies must increase the density of their base stations in a single area.