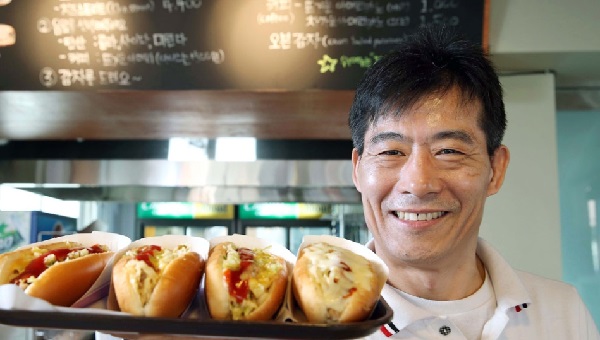 Early on Tuesday morning, Kim Young-chul, the 48-year-old owner of Young Chul Street Burger, was busy slicing and dicing pork and vegetables in his kitchen.

His 33-square-meter (355-square-foot) restaurant, located on the second floor of a building near Korea University in Anam-dong, northern Seoul, was set to reopen the next day and Kim was there to make sure everything was in proper working order.

On a bulletin board at the corner of the shop were posts written by customers. “I’ve been a regular since my freshman year,” one said.

“You can rise again,” said another.

Young Chul Street Burger has long been an iconic hamburger joint, particularly among the students at Korea University, thanks to its affordability and taste.

The restaurant’s reopening comes six months after it shut its doors in July due to financial difficulties. It has also moved up one floor in the building in which it had originally been operating since 2005.

Kim started the business in 2000, when he started selling hamburgers for 1,000 won ($0.83) at the back entrance of one of Korea’s most prestigious universities.

His inexpensive fare was a hit with students but also started to attract other customers, which helped his business expand.

What could have been a model success story quickly turned south, and his student customers, once fierce loyalists to his brand, turned their backs when he started selling higher-end burgers with a price tag between 6,000 and 7,000 won.

With a dwindling base, he finally had to close up the shop last year.

“The reason I was able to reopen Young Chul Street Burger was because of its human compassion as well as digital technology, which helped me connect with others,” he said.

Kim has donated more than 20 million won to Korea University each year since 2004, and when the news broke that his business was shutting down, the school’s students, alumni and faculty all pitched in to help him get his restaurant back up and running.

“Young Chul and the students at Korea University have tight relationship that goes back 15 years,” said 23-year-old Seol Dong-yeon, who heads the student council. “Of course we want to give back.”