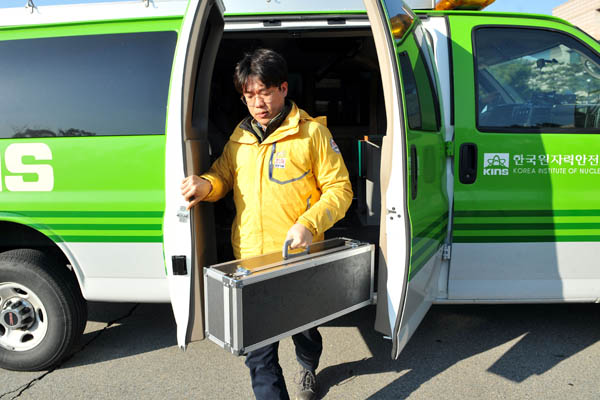 A researcher in Daejeon returns to the Korea Institute of Nuclear Safety on Friday after collecting samples for an analysis to verify whether North Korea detonated a hydrogen bomb. [KIM SEONG-TAE]

Citing U.S. government sources, CNN reported that “a nuclear test of any type would emit distinctive elements into the air and collected samples can be analyzed to determine exactly what occurred.”

“The WC-135W jet,” it added, “dubbed the ‘Constant Phoenix’,” would perfectly suit that role.

“Officials said the United States also has ground stations in the area that will be taking samples to verify or debunk North Korea’s claim,” the broadcaster continued in a written article headlined, “Air Force radiation ‘sniffer’ jet may be headed to Korea.”

The Washington Post wrote on Wednesday local time that “the use of the so-called nuclear ‘sniffer plane’ was confirmed on Tuesday” by an official at the Pentagon, speaking on the condition of anonymity.

“We’ll know for sure once the WC-135 gets air samples,” the paper cited the defense official in the article headlined, “This is the Air Force radiation sniffer plane deploying after North Korea’s nuclear test.”

A spokesman for Korea’s Ministry of National Defense said Friday that he could not confirm the reports due to the sensitivity of the operation, though local pundits have deemed the latest reports as highly credible because the device was previously mobilized after North Korea’s third nuclear test in February 2013.

However, it reportedly could not confirm nuclear activity in the North due to the minimal amount of radioactive debris.

First introduced in 1965, the WC-135 Constant Phoenix is a special-purpose aircraft whose key mission is to collect and analyze gas and debris in the atmosphere using air-sampling equipment in order to verify and detect nuclear explosions.

Air-sampling missions have routinely been conducted over the past decades, most notably following the 1986 Chernobyl disaster.

On Friday, the South Korean government finished gathering air samples for its second analysis on the detonation, led by the Korea Institute of Nuclear Safety. Sampling procedures for the first trial wrapped up Thursday, with the results yet to be revealed.

Although North Korea announced Wednesday that it had detonated its first hydrogen bomb, international experts have remained skeptical of that claim, referencing seismic data indicating the blast was too small for it to have been of a hydrogen bomb.