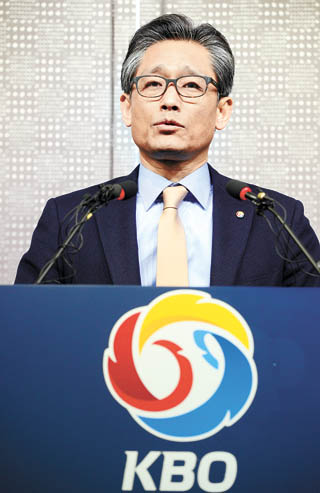 The governing body of Korea’s top professional baseball league said Lim and Oh, who are currently free agents, will be banned for half their team’s games if they return to the KBO League.

Both were also recently ordered to pay a fine of 7 million won ($5,800) after prosecutors decided their actions constituted a summary offense.

The punishment for the two former Samsung Lions players is different from the KBO’s previous actions against players charged with illegal activities. In 2009, the league slapped Lions infielder Chae Tae-in and former LG Twins pitcher Oh Sang-min with a five-game suspension, 2 million won fine and 48 hours of community service after they were charged with illegally gambling online.

The KBO said it decided to hand out a “severe” punishment for Lim and Oh. As KBO teams each play 144 games this year, this translates into a 72-game ban. But is the punishment really severe? Ilgan Sports, an affiliate of the Korea JoongAng Daily, reviewed previous punishments for law-breaking players.

In March 2012, Korean baseball fans were shocked to learn that active professional players were involved in match fixing. Then-LG Twins pitchers Park Hyun-joon and Kim Sung-hyun admitted to consulting with a gambling broker and deliberately pitching to get bases on balls.

After prosecutors decided to indict the players, the Twins announced they fired the players from the team and would ask for lifetime bans from the KBO once their sentences were announced.

After Park and Kim were sentenced with six months in prison with two years of probation, the KBO handed them lifetime bans, saying that it was harshly punishing the players to discourage match-fixing from ever happening again in Korea.

Former Lotte Giants player Jung Soo-keun was known to be a heavy drinker, and his drinking habits eventually forced him out of the KBO League.

In July 2008, Jung assaulted a security guard at his apartment while drunk. The four-time KBO stolen base champion was later fined 7 million won by the court, and the KBO followed up with an indefinite disqualification of his player status - the second-heaviest punishment after a lifetime suspension. If a lifetime ban is equivalent to a “death sentence” for a player, an indefinite disqualification status is similar to “life in prison,” which could be lifted in the future.

Eleven months later, Jung was able to return to the field after the KBO decided to lift his ban following a request from the Giants. But in September 2009, Jung was again involved in a drinking brawl at a bar in Busan.

The Giants decided to release Jung after the incident, saying that his drinking indicated Jung didn’t understand how serious his situation was. The KBO again handed him an indefinite disqualification of his player status, which forced Jung to retire.


Drunk driving: suspended for the rest of seasons

Last June, LG Twins pitcher Jeong Chan-heon fell into hot water after he drove drunk and collided with a motorcyclist. The Twins handed him a three-month suspension and 10 million won fine, but the KBO stepped in, suspending the 25-year-old for the rest of the season and ordering him to complete 240 hours of community service.

Jung was found guilty when the Twins had already played 69 games in the season, so he was technically given a 75-game suspension.

In September, teammate Jung Seong-hoon was also convicted of having driven drunk in the parking lot of his apartment building in August. The 35-year-old infielder had used a chauffeur service back to his apartment after a night of drinking, but he made the mistake of getting behind the wheel in order to park his own car.

The Twins later slapped Jung with a 10 million won fine, but the KBO again meted out its own punishment, suspending him for the rest of the season and making him serve 120 hours of community service. Since his actions were discovered near the end of the season, he only missed 13 games.

In June 2013, former Nexen Heroes infielder Kim Min-woo got into a car accident while drunk and driving with a suspended license. The Heroes hit him with a 30-game suspension and 10 million won fine, but the KBO stepped in to ban Kim from playing for three months, ordering him to serve 240 hours of community service.

The KBO has been stricter about players getting into trouble while drunk than with other illegal activities.