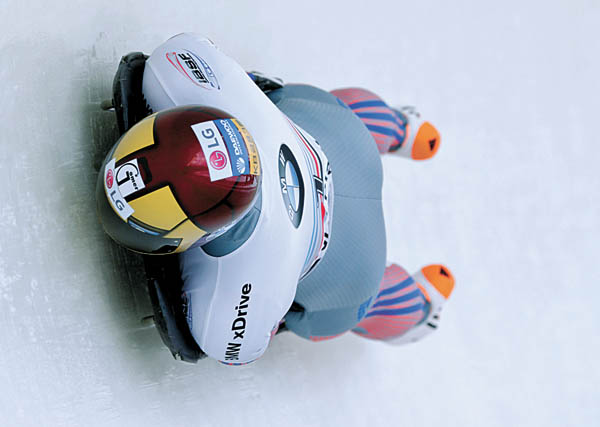 World No. 1 Martins Dukurs took the gold medal with 1:48.28. The Latvian has placed first in every World Cup this season. His older brother, Tomass Dukurs, was third at 1:49.13.

This was Yun’s first silver medal this season and the second in his career. The Korea National Sport University student previously claimed silver at last season’s World Cup event in St. Moritz, Switzerland.

Yun, who finished 16th in the 2014 Sochi Winter Olympic Games, had one silver and two bronze medals in last season’s World Cup series.

Yun is one of Korea’s winter sports athletes hoping to medal in the upcoming 2018 Pyeongchang Winter Games, along with two-man bobsleigh team Won Yun-jong and Seo Young-woo.

In their World Cup races at Lake Placid, Won and Seo won bronze after the United States’ Carlo Valdes and Steven Holcomb and Germany’s Nico Walther and Christian Poser.

At this event, the Korean skeleton and bobsleigh teams put stickers on their helmets and sleds to commemorate their bobsleigh coach, Malcolm Lloyd, who died of cancer on Sunday.

Lloyd, who died at the age of 68, coached Korea from 2013. The Welshman previously coached countries including Russia, Italy and the U.K.