Hopkins back as King Lear - sort of

Hopkins back as King Lear - sort of 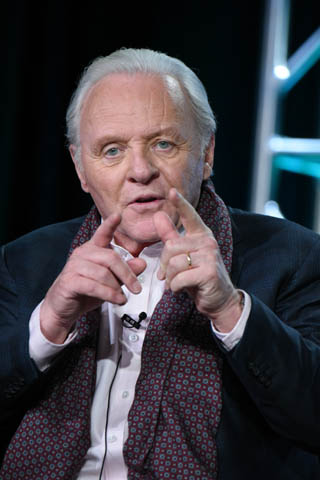 Unlike many actors of his generation, Anthony Hopkins says he had an uneasy relationship with the work of William Shakespeare.

His background - he grew up wanting to be a musician, not an actor - had something to do with it. But Hopkins, 78, admitted on Friday that it was fear he wasn’t up to the material that led him to Hollywood and movie-making largely full-time after playing King Lear on the British stage in 1986.

“Now, after all these years, I know how to do it,” Hopkins said.

He returned to King Lear, in a way. Hopkins is in the movie version of “The Dresser,” a play adaptation in which he portrays an old actor who performs the Shakespeare role in wartime England. Ian McKellen is his dresser, the backstage friend who gets him ready for each performance. “The Dresser” has already been shown on BBC and will appear on the Starz network this summer.

Hopkins said he appreciated the character and the need of actors to act.

“Did I ever want to quit?” he asked. “Yes, several times. Every day I think about quitting, but they come up and offer me a job and I say, ‘OK.’ We are mad. We want to be loved. We want more, more.”

McKellen, who had never shared a stage or screen with Hopkins before this project, said he’s never thought of quitting.

“You don’t have to stop,” he said. “There will always be a part for an old geezer in the corner of the stage.”