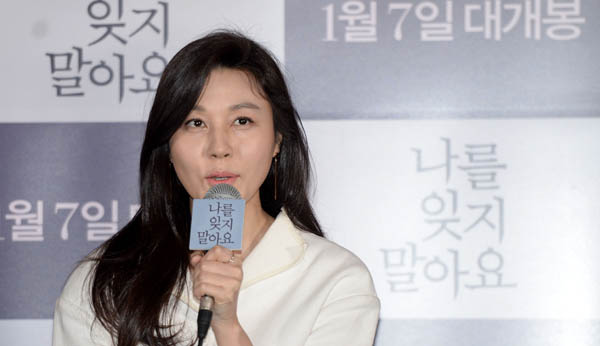 Kim Ha-neul speaks at a recent press event at the Wangsimni CGV in eastern Seoul. [NEWSIS]

It is not as if she hasn’t attempted other genres. Over the past 20 years or so, the 36-year-old has appeared in thrillers, costume dramas and more. But one cannot argue that she has shined the most in films like “Ditto” (2000) and “My Tutor Friend” (2003) and, most recently, in the popular drama series “A Gentleman’s Dignity” (2012), all of which revolve around a love story.

After a three-year hiatus, Kim has returned with yet another romance flick, “Remember You,” co-starring Jung Woo-sung. In the film, which opened on Thursday, she plays Jin-young, a mysterious girl who one day appears before Seok-won, a man who lost 10 years worth of memories, and helps him adapt to his daily routine.

Kim explains that the film is a “romance with a hint of mystery.”

“Although we filmed it during the summer, it contains warmth that goes well with the winter. I believe after watching the film, people will be able to reflect on themselves,” Kim said in a recent interview with Ilgan Sports, an affiliate of the Korea JoongAng Daily. 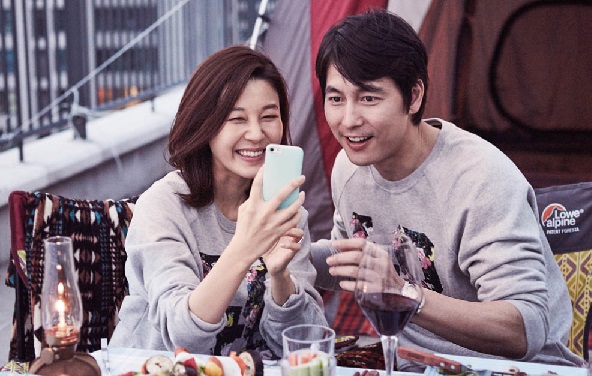 Q. Why did you choose to star in “Remember You”?

A. When I first glanced at its screenplay, I thought it had its own vibe, which is hard to find in Korean romances. The fact that it had something more to offer other than just romance drew me in more.

Until now, Jung and I had no occasion to cross each other’s path in terms of work. There was no single project that both of us were talked about being cast in. I wondered how he and I would look in the same frame, and after our first shoot, the staff all applauded us. I guess we looked pretty nice on camera.

You had many emotional scenes. How were they?

I always get nervous prior to filming a sentimental scene because I am influenced a lot by how I feel on the set. The first emotional scene for this movie was tearing up at the hospital in front of Seok-won, which was very challenging for me because I hadn’t gotten familiar with Jung yet. But Jung really helped me a lot to get into that sad mood, such as by keeping eye contact even when he wasn’t in the angle.

Did you give any ideas for the film?

I participate actively in every project, but I was particularly enthusiastic about this one. I would call the director at 3 o’clock in the morning if a good line popped into my head, and we had a good connection, probably because she is a woman, too.

You are looking forward to getting married in March. Perhaps this movie will be your last romance before you become a newlywed. How do you feel about it?

The word “last” makes me a bit sad, but I guess there are good things, too. I feel more stable and feel like I can focus more thoroughly on my character.

Do you have any fantasies about marriage?

I have had many thoughts about it because I did a lot of romance films since I was young. And most importantly, films and dramas generally have happy endings, and all of the events and happenings are portrayed so dramatically, which leads me to maintain those fantasies.

Next year marks the 20th anniversary of your debut. How do you feel?

I can’t believe time has gone so fast. I like being identified by names like “rom-com queen,” but from now on, I want to become a more irreplaceable actress in films beyond that genre.