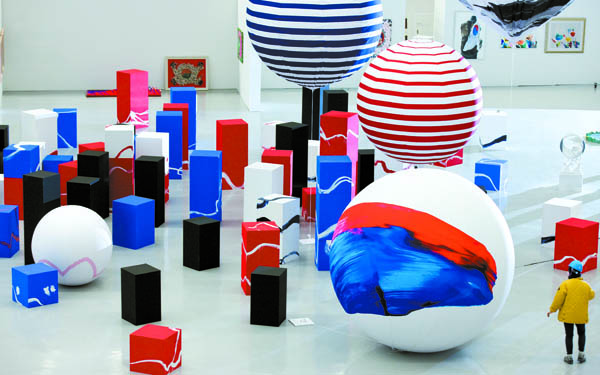 In the aftermath of the Paris terror attacks in November, many Facebook users applied the French national flag colors over their profile pictures to express their condolences.

This was especially the case after Facebook CEO Mark Zuckerberg used the French flag filter on his profile picture.

The French Tricolor, whose colors each stand for freedom, equality and brotherhood, is often used in art and other cultural arenas. The same goes for the U.S. Stars and Stripes and the U.K. Union Jack.

In fact, fashion and home decor items with the Union Jack design can easily be found in Korea these days, even though the items don’t have any special ties to the United Kingdom.

But what about the Korean national flag, the Taegukgi?

Many would agree that the Taegukgi is not really Koreans’ favorite as a motif for artwork. In fact, few can name a famous artwork that features the national flag as a motif. The Taegukgi is also rarely seen on fashion and home decor items. Nor is it associated with an artsy or chic image, even in Korea.

Rather, for most Koreans, the Taegukgi only brings to mind the cleanly framed flags found hanging on the wall of a school classroom or raised on a flagstaff in front of an important government building - both of which are associated with heavy values like nation, nationalism, authority and the central government.

That the Taegukgi is perceived this way in Korea is evident in popular culture, for instance in movies.

In the 2015 hit movie “Assassination,” which drew 12.7 million viewers, An Ok-yun (played by actress Jun Ji-hyun) and two other independence fighters take a group portrait in front of the flag before they leave for Seoul for their mission. In the scene, also used in the movie’s main poster, the Taegukgi stands for their yearning for independence.

In fact, the scene is based on historical fact. Before Korean independence fighters headed to execute their mission, they often took a photo in front of the national flag. It could very well be their last photo.

In another blockbuster epic film from last year, “Ode to My Father,” which attracted 14.3 million moviegoers, the Taegukgi symbolized the state. Even when main characters Deok-su (played by Hwang Jung-min) and Young-ja (Kim Yoon-jin) are fighting heatedly on the streets, when a siren goes off signaling the descent of the national flag, they stop fighting and salute for a while.

In the 1970s, the descent of the national flag took place either at 5 or 6 in the evening, and whenever that happened, a siren would sound and the national anthem would play while people saluted. Those who refused to do so were frowned upon, with some even suspected of being Communists.

Experts say these images of the Taegukgi are part of the reason so-called taeguk art never really took off in the Korean art scene.

“The Taegukgi has functioned for a long time as the brand of the Republic of Korea [as opposed to North Korea],” said Kim Byung-jong, an art professor at Seoul National University. “It’s been difficult to approach it and apply it in design.”

In fact, most observers say the design of the flag itself puts emphasis on central authority.

Park Nak-kyu, a former aesthetics professor at Seoul National University, said that “visually, where the blue and red, or the yin and yang, is positioned is quite symbolic and calculated. When the Daehan Empire [1897-1910] adopted the flag, it wanted to emphasize that it’s an empire and also place ‘the nation’ in the center. And such a determination made the flag’s design what it is today.”

However, experts say that the original values the Taegukgi stood for have little to do with such political values like the nation, nationalism, authority or the central government.

Song Chun-yeong, an emeritus professor at Daegu National University of Education, says that the white background stands for Koreans’ traditional love for peace, whereas the taeguk in the middle stands for the balance between yin and yang, as well as the truth that the universe revolves around the balance of the two. And the four black trigrams represent how the yin and yang evolve and develop constantly.

Things began to change with the turn of the millennium.

During the 2002 FIFA World Cup co-hosted by Korea and Japan, Koreans painted the national flag on their faces and adopted elements of the flag in their fashion.

“I have always been greatly impressed and inspired by these symbols. The curvy lines in the taeguk display the emotions and warmth of Koreans, while the straight lines in the black trigrams represent the strength and perseverance of the Korean people,” Kim, the CEO of Innodesign, told the Korean JoongAng Daily during a 2013 interview.

The Korea Art Festival, which took place between Dec. 18 and 30 at Dongdaemun Design Plaza in Jung District, central Seoul, attempted to explore the potential of taeguk art. Up-and-coming artists, along with renowned artists, presented their works inspired by the Taegukgi.

The festival, co-hosted by the Ministry of the Interior and the Ministry of Culture, Sports and Tourism, chose “Taegukgi and I” as the theme, as last year marked the 70th anniversary of Korea’s liberation from Japanese colonial rule (1910-45).


“At first, we were nervous because the theme was rather broad and we weren’t sure what kind of artwork we would receive [from average people],” Sun Seung-hye, the director of culture and research at the Asia Institute, told the Korea JoongAng Daily.

Sun was the artistic director of the festival, which accepted submissions from anyone over the age of 19.

Sun said she hoped to see a wide spectrum of taeguk art, as the national flag originally embodies universal values - like the balance of the universe and the changing nature of things - and is not just about the independence movement, economic growth or the democracy movement.

“Those who lived in the early 20th century associate the flag with the independence movement, while those who lived in the ’60s and ’70s link the symbol with economic growth or the democracy movement,” Sun said. “And it was evident in the artwork submitted. In those works, the Taegukgi is interpreted as just a flag. The furthest they went was nature, trying to read the meaning behind the taeguk symbol and the four trigrams.”

However, those born after the 1990s showed conspicuously different - and creative - interpretations, she said. Their works were brighter and more playful.

The winning work, for instance, was by three young artists in their early 20s. Kim Joon-soo, Kim Sung-pil and Chun Jin-woo did not grow up seeing the Taegukgi in movie theaters or having to salute it daily.

Their work, titled “Recover the Light,” won the presidential award, the highest honor at the festival. The 3-meter-high (9.8-foot) digital projection piece took elements from the national flag, and the elements - the taeguk and trigrams - danced to various lights.

“It took us about a century to get rid of the typical prejudices of the Taegukgi and rediscover the values that it actually stands for,” Sun said. “I also rediscovered the national flag this time and have high hopes for taeguk art.”