North’s tech may be advancing

North’s tech may be advancing 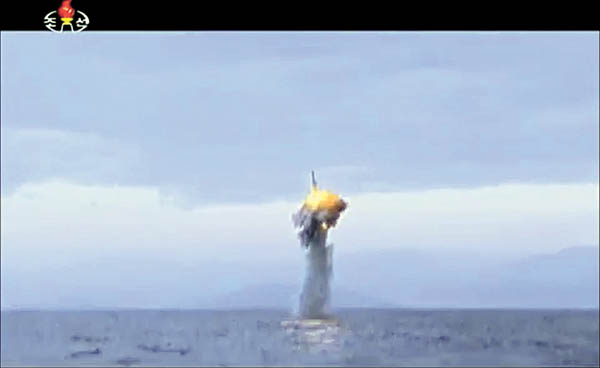 The South Korean military has raised concerns that Pyongyang may be able to deploy a submarine-launched ballistic missile (SLBM) at least a year earlier than initially estimated, as the North continues to flaunt its missile capabilities on its state media.

North Korea broadcasted on television a clip of a purportedly successful new SLBM test for the first time on Friday, after proclaiming that it had conducted its first successful hydrogen bomb test two days earlier.

In the clip, broadcast as part of a documentary aired on the state-run Korean Central Television, North Korean leader Kim Jong-un is shown observing a missile launched at a nearly vertical angle from underwater. The missile shoots up and ignites in midair in the clip.

Kim is shown in a black coat and hat aboard a military vessel giving field guidance over what is said to be an SLBM launch test. He is all smiles afterward.

The test is reported to have been conducted on Dec. 21 in the East Sea.

South Korean military officials have brought up doubts over the video clip’s credibility, suggesting it could have been doctored or edited.

“The clip revealed by North Korea on Jan. 8 looks to have been edited by inserting a scene of a [past missile launch],” a South Korean military official pointed out on Saturday. “It looks as if [the clip] has been manipulated so that the SLBM flight test was successful.”

A part of the video appears to be edited with a clip of the North’s Scud missile test from July 2014.

The official added that it is believed that North Korea’s SLBM technology is still in the ejection stage “and not yet in the flight test stage.”

However, the South Korean military is cautious because North Korea’s technological advancement is possibly happening more quickly than initially estimated, saying on Saturday that Pyongyang may be able to deploy SLBMs within four years. It had initially estimated at least five years.

“While it is not conclusive, based on the angle of the missile blast, a part of North Korea’s SLBM ejection technology could have been improved,” the military official said.

The official pointed out that the video North Korea showed in May indicated a launch angle of around 74 degrees, while the newest clip showed it at closer to a perpendicular angle of 90 degrees.

Pyongyang first announced on May 8 last year that it had successfully test-fired an SLBM under the orders of Kim Jong-un.

“In the case that North Korea focuses its national capacity on developing the SLBM, it could be put into operation around a year earlier than we had initially anticipated,” the official added. “We cannot rule out that it could be operational within three to four years.”

U.S. defense officials were reported earlier this month as saying North Korea conducted a new successful SLBM test on Dec. 21 near the port city of Sinpo, which the Pentagon said was the KN-11 missile.

South Korean government officials confirmed the SLBM launch in December. The North conducted an unsuccessful test in November, in which a missile failed to leave the water.