Free agent Oh set to join the Cardinals in the MLB

Free agent Oh set to join the Cardinals in the MLB 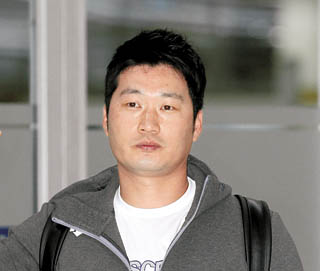 According to MLB.com and U.S. media reports, Oh has reportedly passed a medical screening and is expected to be introduced by the 11-time World Series champions today.

Oh, who is the all-time saves leader in the Korea Baseball Organization (KBO), left for the United States on Sunday. As his destination turned out to be Detroit, rumors have been circulating that he would sign with the MLB central-division clubs.

Oh was looking to play in the MLB since his contract with the Japanese club Hanshin Tigers came to an end. The 33-year-old right-hander had amassed 80 saves in his two seasons in Nippon Professional Baseball (NPB).

Before going to Japan, Oh set a KBO record with 277 saves while playing nine seasons with the Samsung Lions.

Oh could also be the third Korean to land in the MLB during this offseason, after former Nexen Heroes slugger Park Byung-ho signed with the Minnesota Twins and former Doosan Bears outfielder Kim Hyun-soo inked a deal with the Baltimore Orioles.

Oh’s road to the MLB hasn’t been smooth since he was charged with illegal overseas gambling last month.

After questioning him for five hours on Dec. 9, Seoul prosecutors decided on Dec. 30 to issue Oh a relatively minor 7 million won ($5,790) fine, citing the small amount of money he gambled and raising doubts that he was a habitual gambler.

The KBO later handed Oh a half-season suspension for the charges. But since the punishment only applies when he returns to the KBO, he is technically free to play overseas.

When Oh joins the Cardinals, analysts believe he will not be the closing pitcher, a position he has played in the KBO and NPB, because of the team’s right-hander Trevor Rosenthal. The 25-year-old American last season was the second top closer in the MLB’s National League, with 48 saves.