The 11-year-old answer to Kim Yu-na

The 11-year-old answer to Kim Yu-na 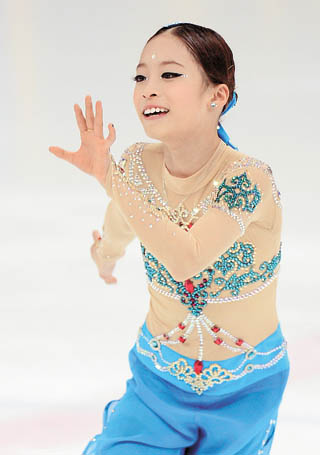 Can Korea expect the next Kim Yu-na from an 11-year-old figure skater?

While former Olympic figure skating champion Kim watched from the stands, You Young finished first in the women’s senior category at the 70th National Figure Skating Championship on Sunday, becoming the youngest winner of the competition at the age of 11 years and 8 months.

You’s record beats that of Kim, who is the first and only Korean figure skater to win Olympic gold. Kim was previously the youngest winner to win the national event, in 2003 at the age of 12 years and 6 months.

In the tournament held at Mokdong Ice Rink in Seoul, You scored a total 183.75 points, with 122.66 points in her free skating programs Saturday and 61.09 points in her short programs Sunday.

“When I’m on the ice, I feel like I’m in heaven,” You said on Sunday to reporters after winning the event. “I was satisfied and proud of the result, but at the same time, I cried because I was also tired.”

You, a sixth-grade student in Munwon Elementary School in Gwacheon, Gyeonggi, has already gained a reputation as a record breaker.

Last year, she became the youngest athlete to join Korea’s national figure skating team. You finished seventh in the team’s qualifiers after joining the squad at just 10 years and 7 months.

You was raised in Singapore, and even though she was living in a country not exactly known for its winter sports, she got interested in figure skating because of her mother.

Lee has said she watched a video clip of Kim winning gold at the 2010 Vancouver Winter Games over and over again, and her daughter soon started to watch with her. Since there were no professional figure skating coaches in Singapore, You first imitated the jumps of Kim and Japanese figure skater Asada Mao on her own, after watching their performances online.

“You first came to Korea when she was 9 years old, and within a month of learning to figure skate, her skills improved dramatically,” Lee said. “Since 2013, we decided to return to Korea permanently in order for her to learn to skate professionally.”

Figure skating experts have been eyeing You because her skills are developing quickly, becoming the best in the nation within just two years of picking up a pair of skates.

“[You] was a normal kid, but within a single year, she learned how to do the triple jump,” said You’s coach Han Sung-mi.

“She is also an inquisitive athlete who likes to ask lots of questions whenever she’s not sure about something.”

Korea has been trying to find the next Kim Yu-na after she retired from the ice in 2014.

While high school students Kim Hae-jin and Park So-youn are considered the first generation of skaters in the post-Kim Yu-na era, You and other elementary school-aged talents are seen as the second-generation.

In this national tournament, Lim Eun-soo and Kim Ye-rim, who are a year older than You and are also on the national team, finished third and fourth, respectively.

“These elementary school figure skaters perform better than I did at their age,” said Kim Yu-na who greeted skaters at the podium on Sunday and also donated 50 million won ($41,350) with KB Financial Group to Korea Skating Union (KSU) for the development of figure skating prospects.

Kim, who is a two-time World Figure Skating Championships champion, emphasized that sticking to the basics of figure skating will further improve the young skaters’ performance. She also urged them to be careful to avoid injuries while they are growing.

You said she’s currently looking to learn the triple Axel jump, considered the most difficult move in the sport, where the skater has to complete three-and-a-half full rotations in the air. Although it is nearly impossible for young skaters to execute the jump, You said she keeps trying.

“I tried for the triple axel jump about a season ago, but at this moment, I’m not even close,” she said. “I think I’ve improved from before, but my coach said that I should practice it after this season is completed.”

But despite winning this latest event, You will not be able to participate in international events because of a new rule.

Starting this year, the KSU has mandated that only skaters 13 years or older should be able to represent Korea in international events.

The KSU, therefore, selected runner-up Choi Da-bin, who turns 16 next week, and 18-year-old Park So-youn, who finished fifth in the event, to compete at the World Figure Skating Championships, which will be held in Boston in March.

The age limit also means that You will be sidelined for Korea’s first-ever Winter Olympics at home, the 2018 PyeongChang Winter Games. Still, You - who can also speak English and Chinese - said she won’t give up her dream of competing in the 2022 Winter Olympics in Beijing.

“I forgot how to speak Chinese well because I’ve had no opportunity to use it, but in 2022, I hope I can use my Chinese at the podium,” You said.