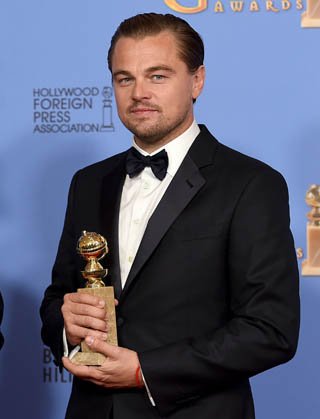 Leonardo DiCaprio did more than just survive a bear mauling in “The Revenant.’’ He won a Golden Globe as best dramatic actor for the 19th-century survival epic.

The movie also earned Globes for motion picture and for director Alejandro Inarritu at the Sunday night ceremony.

“It’s very rewarding,’’ DiCaprio said backstage. “We had a very solid opening weekend because I think people appreciate seeing a different type of cinema out there.’’

DiCaprio was saluted with a standing ovation from the audience when his name was called at the Beverly Hilton hotel.

As a fur trapper, DiCaprio braved icy waters, ate raw bison and went to find his mates who left him for dead in the unforgiving wilderness. The film was shot during nine months in what he described as “rough conditions.’’

“I share the award with all the indigenous communities around the world,’’ DiCaprio said in his acceptance speech. “It is time we recognize your history and protect your indigenous lands from corporate interests and people who are out there to exploit them.’’

DiCaprio beat out fellow nominees Bryan Cranston of “Trumbo,’’ Michael Fassbender of “Steve Jobs,’’ Eddie Redmayne of “The Danish Girl,’’ and Will Smith of “Concussion.’’

The 41-year-old actor born in Hollywood earned his third career Golden Globe. His earlier wins came two years ago for “The Wolf of Wall Street’’ and in 2005 for “The Aviator.’’ AP