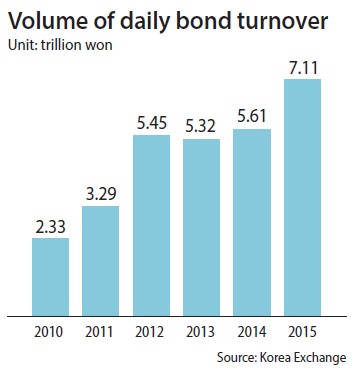 The Korean bond market had a record year in 2015, with average daily trading volume hitting an all-time high as investors turned to safer assets like bonds amid high volatility in financial markets, a report by the Korea Exchange showed on Monday.

Since 2010, the Korean bond market has shown gradual increases in its trading volume, except for 2013. The market ballooned from 2.33 trillion won in 2010 to 5.45 trillion won in 2012, but it then experienced a 2.5 percent decline in 2013 due to expanded uncertainties in the market.

The market has recovered since 2014, as investors have been turning their attention from risky assets to safer assets like bonds as the global economic slowdown has persisted for longer than expected.

“The surge in bond trading last year is attributable to an increased number of investors flocking to safer assets amid expected changes in interest rates worldwide,” the report said.

The U.S. Federal Reserve raised its benchmark interest rate by 0.25 percentage points in December for the first time in nearly a decade.

The Bank of Korea, which shed its key rate by 0.25 percentage points to an all-time low of 1.5 percent in June, kept the rate unchanged until December.

As the era of low interest rates continued last year, the average yield on three-year Treasury notes stood at 1.798 percent, while the yield on five-year government bonds recorded 1.977 percent, both marking an all-time low.

“Treasury bonds were the most popular in the market,” said Lee Jeong-eui, head of the bond market division at Korea Exchange.

Treasury notes accounted for as much as 96 percent of total bond trades, data showed. Among the notes, five-year bonds claimed about 51 percent of the Treasury bond market.

“As the bond market is forecast to thrive this year, too, we are going to increase convenience for investors by providing easier access to the market,” Lee said.