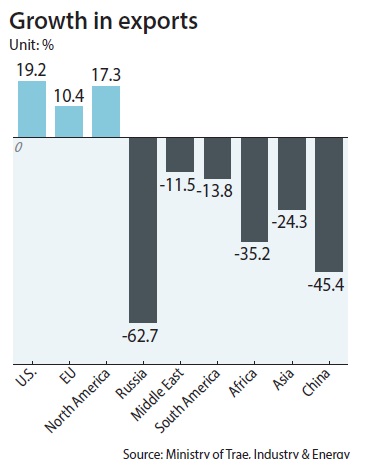 2015 was good for Korea’s auto industry, with domestic sales hitting a record.

But the year saw its share of troubles as well. Domestic sales were buoyed by tax cuts that only lasted four months. And exports actually fell 2.8 percent to below 2 million units, which was the lowest in five years.

According to the Ministry of Trade, Industry and Energy on Monday, 1.83 million units’ vehicles were sold, a 10.4 percent increase year-on-year. The biggest reason was the temporary lowering of individual consumption taxes between August and December. During the 127 days in which the taxes were reduced, sales of the five Korean automakers rose 19.6 percent compared to sales in the first seven months of the year.

In late August, the government lowered the individual consumption tax on cars, home appliances and luxury items by 30 percent to spur spending to help the economy to reach the government’s economic growth target of 3 percent. The tax normally ranges from 5 to 7 percent and was reduced to between 3.5 percent and 4.9 percent.

Local cars had 85 percent of the Korean market in 2015, a historic low, and imports had 15 percent.

Exports fell 2.8 percent from a year earlier to 2.98 million units, the first time in five years that exports dropped below 3 million. Sales in North America and Europe thrived. Korean cars exported to North America in the first 11 months grew 17.3 percent and exports to the United States expanded 19 percent. Exports to Europe advanced 10 percent.

However, exports to emerging markets including Russia, Brazil and even China dropped significantly as the economies of those countries struggled. Exports to Russia fell more than 60 percent and exports to China tumbled 45.4 percent. Korean vehicles shipped to other Asian markets fell 24.3 percent.

“Sales in the United States rose thanks to the recovery of automotive demand and the release of new vehicles including the Avante, Tucson and K5,” said a ministry official. “However, economic troubles and devaluations in emerging countries’ currencies negatively affected exports.”