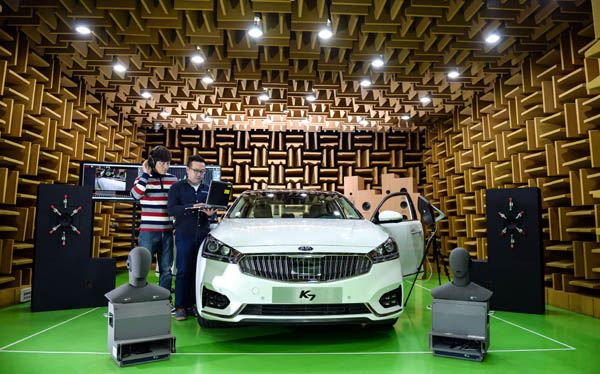 HWASEONG, Gyeonggi - Kia Motors has partially revealed some of the features of the new K7 sedan, which it hopes will do well in the competitive mid-to-large sedan market predicted for the first half of the year.

In an event held Monday at the Namyang R&D center in Hwaseong, Gyeonggi, the nation’s second-largest automaker revealed some features of the second-generation K7, which has been fully changed seven years after it was introduced in 2009.

“The K7 reflects Kia’s every possible effort to develop a next-generation premium car,” said Jung Rag, executive vice president of Kia. “It will truly show customers what a premium car is. People in their 40s are our target consumer group.” 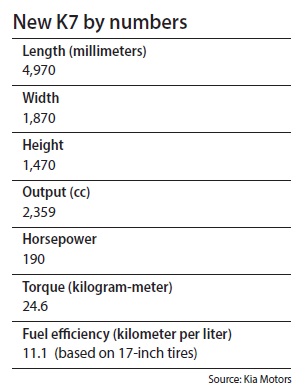 Of the features unveiled, the sedan’s front-wheel, eight-speed automatic transmission was most spotlighted. Kia said the transmission was the first of its kind developed by an automaker and third overall if parts makers are considered.

“It took three years and two months to develop, with a total of 143 patents registered, including 76 overseas,” said Lim Ki-been, an executive at Kia in charge of transmission development. “Compared to the six-speed automatic transmission used in the K7’s predecessor, it offers smoother gear shifting and makes the car more fuel efficient. In particular, it offers better acceleration at lower speeds while offering better fuel efficiency and a quieter ride at high speeds.”

The automaker said eight-speed transmissions is becoming a trend, adding that only 21 percent of vehicles around the world were built with an eight-speed automatic transmission last year, but that figure is predicted to rise up to 61 percent in 2021.

Only 19 percent of cars were built with an eight-speed transmission in the United States, a key market for Kia, last year, but that is expected to rise up to 84 percent in the next five years, it added.

“We have planned to use this transmission on our SUV lineup later and will consider installing it in midsize sedans sometime in the future,” executive Lim added.

Competition is predicted to be tough for the K7. Kia already saw the Chevrolet Impala, imported by GM Korea last year, successfully attract local consumers. It will also see the launch of the Talisman by Renault Samsung Motors (RSM) later the month, which is considered the K7’s biggest rival in the market.

Fortunately for Kia, the K7 has already has acquired some loyal corporate buyers. According to the automaker, 48 percent, or 106 of 197, of newly promoted executives at Samsung Group have picked the K7 as their company-provided car.

The executives had the option of the Hyundai Grandeur, Impala and RSM’s SM7.