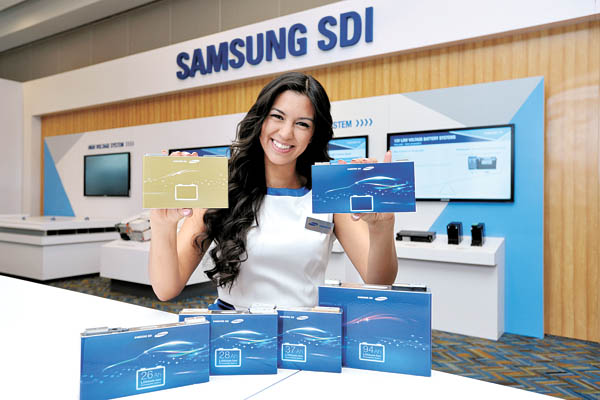 Samsung SDI unveiled Monday the prototype of what it claims to be the highest-density battery cell, which will make it possible for an electric vehicle to travel 600 kilometers (372 miles) on a single charge.

The new lithium-ion battery cell for electric vehicles, which is being shown at the 2016 Detroit Motor Show, has density that has been increased by up to 30 percent and should give the best performance of all EV batteries on the market, the Samsung group company said. Mass production is expected to begin around 2020.

Tesla’s Model S, one of the most energy-efficient EV models currently available, can go as far as 390 kilometers on a single charge.

“We wish to spearhead the era of EVs by presenting various solutions and products that customers and markets demand,” said Samsung SDI CEO Cho Nam-seong. The announcement comes after its affiliate Samsung Electronics announced in early December it would jump onto the bandwagon of EVs.

Samsung SDI is participating in the Detroit show for the first time and is showing off two other EV energy devices targeting the North American market.

One is a compact EV battery pack that is up to 30 percent slimmer than competing products. The other is a low-voltage system solution that can either replace lead storage batteries in non-EVs with lithium-ion batteries or add lithium-ion batteries to existing batteries. When a vehicle uses the system, its energy efficiency may improve by 3 to 20 percent depending on the model, which could appeal to both ordinary drivers and vehicle producers in North America, where environmental regulations are getting stricter.