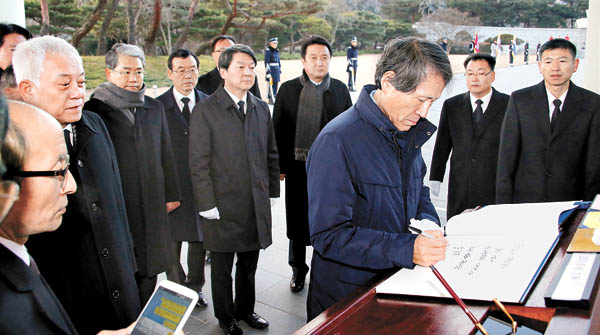 Han Sang-jin, co-chairman of a committee to prepare for the founding of the People’s Party, pays his respects at Seoul National Cemetery on Monday. [NEWSIS]

An exodus from the main opposition party swelled as Kwon Rho-kap, a leader of the faction loyal to the late President Kim Dae-jung, plans to defect from the party this morning to join the People’s Party of Rep. Ahn Cheol-soo.

Kwon, an 85-year-old political veteran who started his career as a secretary to Kim in 1963, will be followed by around eight lawmakers in the next few weeks. That will bring the number of lawmakers in Ahn’s People’s Party to at least 20 - the number needed to form a negotiation bloc in the National Assembly.

According to several aides of Kwon, he will announce his defection at 10 a.m. at the Assembly. In addition, around 10 supporters of the Donggyo-dong faction, named for the street Kim Dae-jung lived on from 1963 until his death in 2009, will also leave the Minjoo Party of Korea today, although they don’t have seats in the legislature.

The Donggyo-dong faction’s defection will be a watershed for the Minjoo Party of Korea, formerly the New Politics Alliance for Democracy, which was founded in March 2014 as a merger of Rep. Kim Han-gill and Moon Jae-in’s Democratic Party and supporters of Ahn.

Moon Jae-in, the incumbent chairman of the Minjoo Party, is the leader of the pro-Roh faction. Moon served as Roh’s chief of staff.

Of the 29 liberal lawmakers from Gwangju and North and South Jeolla constituencies, known as the Honam region, a total of 15 are likely to join the People’s Party by next week at the latest.

If more than eight lawmakers, including Rep. Park Jie-won, a three-term lawmaker who served as presidential chief of staff for Kim Dae Jung, join Ahn, the People’s Party will become a negotiation bloc.

A third negotiation bloc should bring major change to the legislature, which is used to having two major parties.

He paid respect to both liberal and conservative presidents interred at the cemetery, symbolizing his vow to overcome the partisan bitterness of the past.

In the afternoon, Ahn, who has also won the endorsement of Kim Dae-jung’s widow, went to the Honam region to meet supporters.

On Jan. 4, Ahn paid a visit to Kim’s 93-year-old widow Lee Hee-ho at her home in Donggyo-dong, western Seoul. During their talk, she expressed her support for Ahn, the JoongAng Ilbo reported Wednesday, quoting an associate who was present.

He also plans to visit the widow of President Roh this morning to mark the New Year in Roh’s hometown of Bonghwa County in North Gyeongsang.