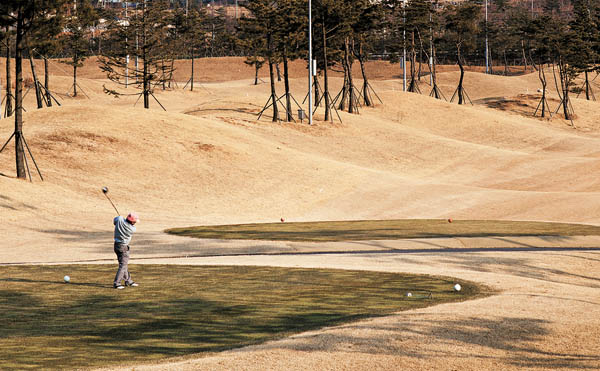 A golfer takes a shot at a golf course in Cheongju, North Chungcheong, on Jan. 7. Local golf clubs have been staying open this winter because of warm weather. [NEWSIS]

For the New Year’s holiday weekend, Mr. Park, a 47-year-old businessman, had originally planned to play screen golf indoors with his friends. But Park later changed his mind and decided to play golf outside when the weather turned out to be surprisingly balmy.

“I usually go for screen golf when the weather isn’t nice, but this winter, it is the opposite,” he said. “This is something I’ve never experienced in the past.”

With the so-called Super El Nino effect, the last two weeks of December and first week of January were warmer than usual, and local golf clubs were smiling as people like Park were visiting more often to play golf. According to data from the Korea Meteorological Administration last week, the average temperature in December 2015 was 3.5 degrees Celsius (38.3 degrees Fahrenheit), the highest since 1973.

“About this time last year, there were only about 20 teams playing in a day, but these days, there are about 40 teams,” said Kim Jong-an, who heads the New Seoul Country Club in Gwangju, Gyeonggi. “In warm weather, some guests make their reservations early in the morning.”

Kim Yoo-jin, a marketing manager at Incheon Sky 72 Golf Club, also said that making reservations has become essential to get on popular golf courses this winter, which wasn’t the norm in the past.

“There is no vacancy because of the warm winter,” Kim said. “It’s really different from last winter.”

Korean golf clubs usually close their doors because of cold weather, but now they are canceling their offseason plans and resuming business.

Ladena Golf Club in Chuncheon, Gangwon, originally announced that it would be closed from Dec. 28 to Feb. 11. However, with no heavy snow and warm weather, the golf club decided to open its doors.

Beacon Hill Golf Club in Hongcheon Country, Gangwon, closed for two months last year, but this year, it decided to rest for only a week. Golf clubs are now busy contacting their caddies, who generally take vacations in the winter, to return for work.

“We usually close our golf club in January, but as the weather forecast shows this year to be warm, we don’t have plans to close our club this month,” said Jeong Seok-chun, an operations manager at the Seowon Country Club in Paju, Gyeonggi.

Golf clubs in the southern area, where the weather is warmer than in northern regions like Gyeonggi and Gangwon, have already been busy with operations. The Pine Beach Country Club in Haenam County, South Jeolla, 380 kilometers (240 miles) south of Seoul, says it has been running the club with double shifts just like it does during the spring and fall.

The warm weather also meant Koreans didn’t have to travel overseas to play golf. According to travel industry insiders, the number of golf trips to Southeast Asia over the New Year’s holiday weekend went down by more than half compared to the past year.

Even retailers are smiling. According to Lotte Department Store, its December sales for golf apparel jumped 13.4 percent from a year earlier.