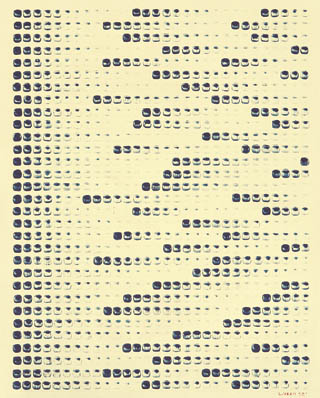 In a major blow to the Korean art scene, which has recently been gaining prominence internationally, a document certifying the authenticity of a painting by renowned artist Lee Ufan has been determined to be fake, heightening speculation that the painting itself may be a forgery.

“It was very shocking that at the auction, which is an open market, the artwork was traded along with a fake appraisal statement, even though there have been some rumors among small-size trading galleries in Insa-dong in the past that some forged works by the artist are being circulated,” said Park Woo-hong of the Galleries Association of Korea.

He was at the forefront of the dansaekhwa movement, characterized by abstract paintings with minimal color and unusual textures, as well as Japan’s Mono-ha movement, which focused on using raw, unaltered materials from the earth, in 1970s. He has continued to garner international attention and held exhibitions at the Guggenheim Museum in New York in 2011 and at the Palace of Versailles in 2014.

Lee, 79, has also been a driving force in the Korean art market, as 71.2 billion won worth of his works, or 567 pieces, have been traded in major auctions in Korea from 2005 to 2014, according to the Korea Art Price Appraisal Association. That’s the most among any modern or contemporary artist in Korea.

Suspicion about his works started to emerge three years ago. But more in-depth investigation into the matter was delayed as many feared the potential effects on the art market of such a scandal involving the works of a living artist. And the artist has been strongly denying the rumors.

“My works are painted with my own [breath and pace], it is hard to imitate,” the artist said previously.

The forgery suspicions arose when pieces from Lee’s popular “From Point” and “From Line” series - some of the artist’s earlier works that had traded at higher prices due to their rarity - began to surface around 2012 and 2013. At the time Lee explained to the media that they were all his.

“Works I had kept in a gallery in Tokyo in the 1970s got stolen,” he said. “I have collected the works that are being questioned over forgery and reviewed them myself, but none of the works were fake.”

After the artist confirmed the authenticity of the controversial works, which were already deemed fake by the Korean Art Appraisal Association, the group stopped appraising any of Lee’s work since 2013. Hence, it has become hard to buy or sell Lee’s works without an appraisal statement, or a history of being sold at auction or exhibited before 2010. The forged appraisal statement for “From Point No. 780217” copied one issued in 2001 by the Galleries Association of Korea.

Furthermore, there had been whispers behind the scenes during a recent exhibition before the auction last month that the work was not really in well-preserved condition. It is speculated that the effect was created using an “aging” technique, which is often done in forged works to make them look older.

Korea has experienced other controversies involving its renowned artists in recent years. There was a two-year-long legal battle to confirm the authenticity of the late artist Park Su-geun’s “The Washing Place,” after it was sold in auction in 2007 for the highest price for a Korean artwork at the time.

Then in August, after the death of artist Chun Kyung-ja, rumors over the authenticity of her work “Beautiful Woman” were ignited.

Among 2,144 artworks appraised by the Korean Art Appraisal Board from 2003 to 2013, 70.7 percent of them were confirmed to be authentic. This means that roughly one in three artworks commissioned to be checked are not authentic, and points to a need for a more systemic approach to tackle the circulation of forged artworks.

“Overseas, there are foundations working with artists, their families and other professionals working together to establish authority for their appraisals,” said Yoon Cheol-kyu, president of the Development Institute of Korean Art Information.

“We should systemically organize not only a way of appraising with discerning eyes, but also the possession history of artworks of each artist and detailed studies by other experts on such pieces.”